Whoooooa Nelly!
The Drama, Majesty and Excitement of Siena's Palio

I may not be much of a sports nut, but I absolutely love the rituals that develop around sport.

As an American, my first taste of it was as a kid on Super Bowl Sundays—I loved having parties with family and friends.

Later, as an adult living in Europe, it was all about soccer, and the absolutely infectious excitement that takes hold of the continent during big games.

But for the people of Siena, Tuscany, the big games come every year—twice, in fact—with the running of the Palio.

The Spectacle Extends Well Beyond the Siena Horse Race

A horse race held each summer on July 2 and August 16, the Palio dates back to the 1600s (and here I thought the Super Bowl had tradition!) and draws an audience of up to 50,000 people to each race.

Like any great sport, it’s the anticipation leading up to the event that ignites excitement, and the Palio doesn’t cut corners in that department.

On our Tuscany Self-Guided Biking trip, there’s something eminently peaceful about riding through hilltop towns that have stood watch since the Middle Ages, passing vines tended by generations of winemakers, and savouring traditional cuisine—all at your own pace. 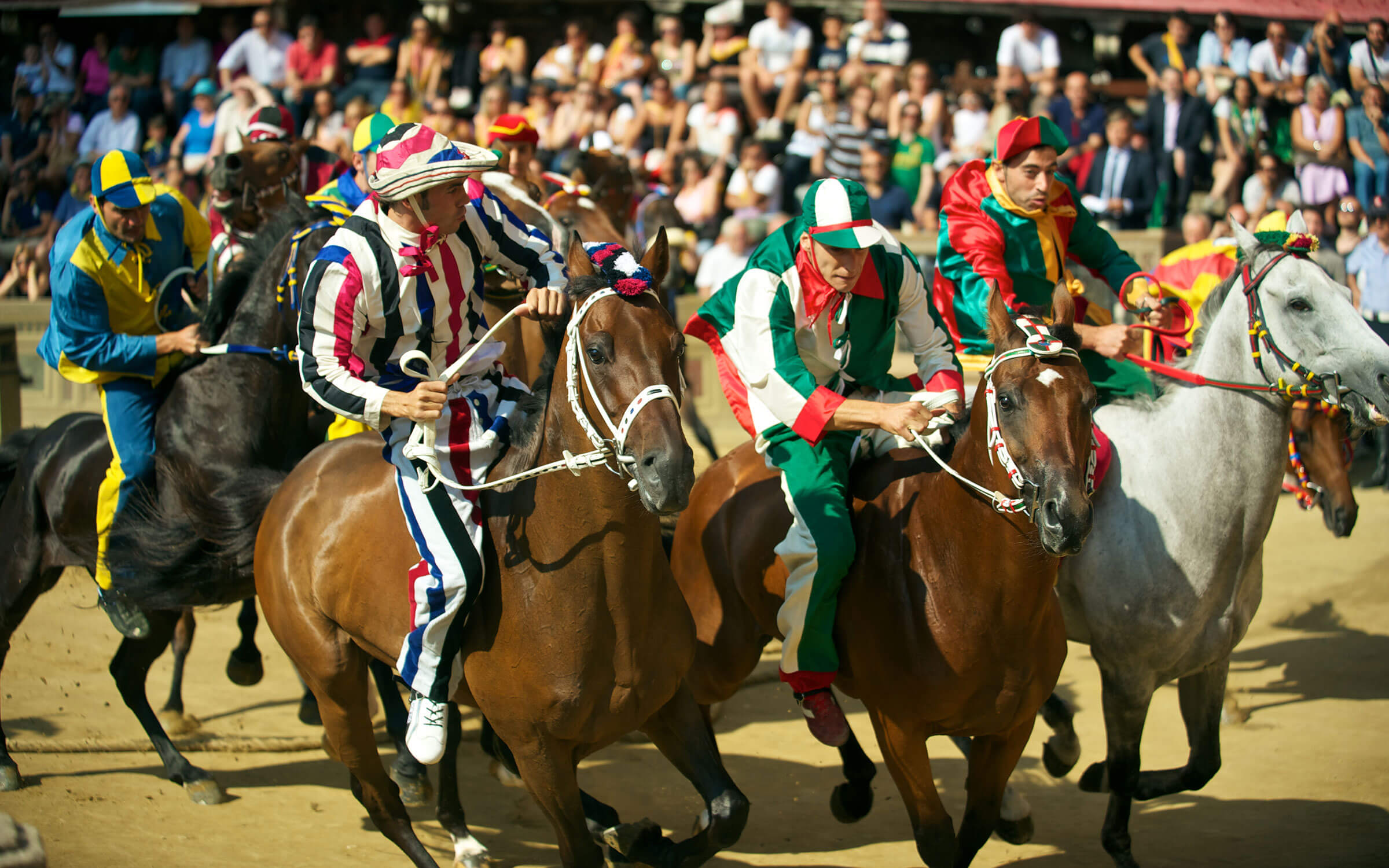 A festive air takes over the town several days before each race, which are punctuated by special events like parades, processions, neighbourhood dinners and even a unique blessing where each horse enters in the neighbourhood church to be given a benedizione by the local priest. (Legend holds that if the horse leaves a—ahem—“gift” of his own in the church, he’s set to win.)

Chief among the pre-race festivities is the selection of the horses. Of the 17 contrade (neighbourhoods), 10 are chosen to be represented at each race, and 10 corresponding horses chosen to represent them.

However, there’s a catch: the jockey doesn’t choose his horse—fate does. A few days before the race, the 10 horses are entered into a draw, and destiny takes it from there, as each one is assigned to a contrada at random.

A Room with a (Helluva!) View

On my most recent visit to Siena, I was lucky enough to witness the spectacle firsthand.

Emotion was tense and an incredible silence took over the square. Rare are the moments that several thousand people, crowded into an open public space, collectively hold their breath in hushed anticipation—especially in Italy. I don’t know if you’ve ever been here (or maybe just met an Italian person), but silence isn’t exactly their forte, as my Italian husband can certainly attest!

With such a large turnout, I was lucky to be viewing the scene from a private apartment overlooking the square, Piazza del Campo. Few people get to witness the event from such a perfect vantage point, but at B&R we’ve been attending the event for years – and fortunately for me (and our travellers, of course), we’ve made some very well-situated friends!

While scouting possible apartments to use for our Private Trips in the future, I slipped up to one of Siena’s noble palaces to watch as each neighbourhood learned which horse would represent them in the July 2 race. After touring the impressive apartment and its original frescoes, we settled in at our window to see what was in store for this year’s race.

The beauty of watching this event from an apartment is that in addition to access to some of Siena’s most historic buildings, which are normally closed to the public, you’re assured a quiet and exclusive view from above.

In keeping with tradition, no loudspeakers are used; one relies on the reaction of the crowd below to grasp who is pleased with the results. Singing, chanting and following the chosen horse through the streets, the festivities continue through the night as neighbours begin to forecast the outcome of the upcoming race.

This excitement continues on through the days leading up to the big day. The race itself is only 90 seconds long, but the parades and processions continue daily and several hours before the main square fills to capacity.

Wooden benches line the square where ticket holders sit, allowing a better view of the race itself. And the balconies, terraces, and roofs of most of the buildings surrounding the shell-shaped square fill with folks in search of a private viewing.

The Palio: The Pinnacle of Siena

Siena is a must-see city when visiting Tuscany; recognized by UNESCO as a World Heritage Site, it’s one of the nation’s most visited tourist attractions. Home to many of Italy’s oldest and most historic aristocratic families, Siena boasts a legacy of impressive cathedrals, monuments, and palaces.

But it’s the Palio that makes Siena. Ask any Senese to speak about the Palio, and watch a wave of loyalty and pride spread across their faces – especially when they recall the time their contrada won.

Experience the event yourself and you’ll likely be left with a similar emotion.