Some regions are so rich in flavour, they can’t be covered in a single blog post. Here, we continue the exploration of Tuscan cuisine we began in Tuscan Cuisine 101 with a look at some of the region’s seasonal specialties.

Truffles grow underground and live symbiotically near the roots of several tree species. Black truffles can be cultivated while white truffles must be “hunted”. When truffles are ripe, they emanate a perfume that’s characteristic for each species: for this, the truffle hunter (trifulao) searches for truffles with the help of a trained dog, or in some cases, a pig!

There are over 25 species of truffles in Italy, but only six are edible; these can all be found each in a specific environment in Tuscany. Each species ripens during a specific time of year:

Because of its intense, fragrant flavour, the prized white truffle can cost up to €3,000 per kilo. Though some can be used in cooking, the best way to taste truffles is freshly grated on pasta or eggs.

These brown-capped mushrooms with thick, white stalks are prized in Italian cuisine. They have a nutty, earthy taste with a meatiness in flavour and texture. They grow naturally in hardwood forests near pine, chestnut, hemlock and spruce trees. Porcini form a mycorrhizal relationship with pine trees. The trees benefit from the large surface area of the mushroom by receiving better access to water and nutrients while the mushroom gets access to sugars produced by the tree. Porcini have a high protein content making them a great meat substitute in vegetarian dishes. 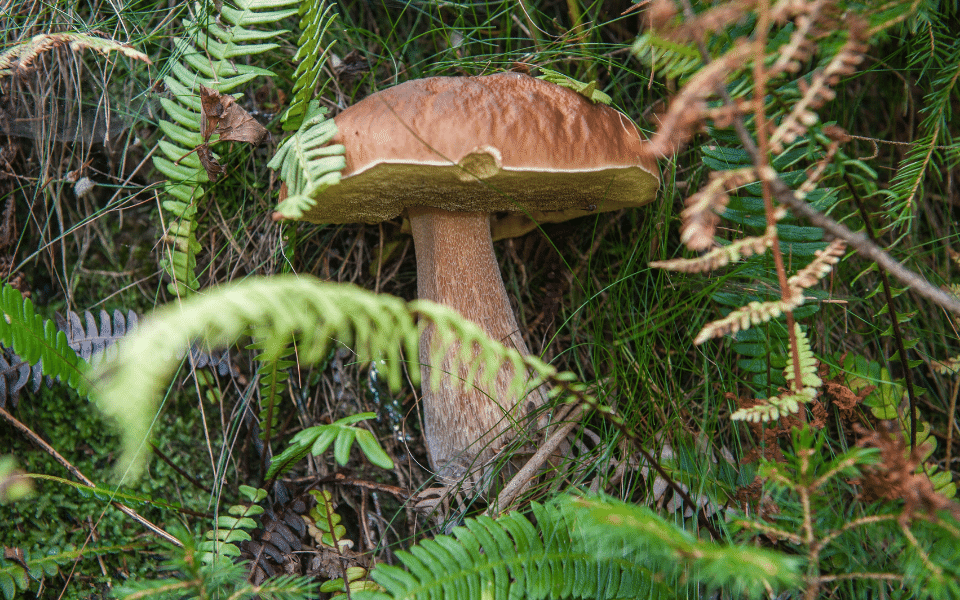 Fresh porcini should be firm with unblemished stalks and caps and stored in a loose paper bag in the crisper of the fridge. Like most mushrooms, porcini should not be rinsed. Use a damp paper towel to wipe off any dirt just before using. The window for fresh porcini is quite brief—approximately 1-2 months.

If buying dried porcini, avoid packages with small crumbs on the bottom as that indicates that the mushrooms are old and lacking in flavour. Keep the dried ones in an airtight container in a dark, cool place for up to six months. Dried porcini can be reconstituted by soaking in warm water for 20-30 minutes until they are soft.

Cinghiale, or wild boar, are widespread throughout Tuscany, particularly in the Maremma region—the coastal area bordering the Tyrrhenian Sea. Hunting season runs from October through January.

Wild boar meat is considered a delicacy. It’s typically made into a stew or sauce which is served with pappardelle pasta. Boar meat can also be used to make prosciutto, salami or sausages. The bristles from the neck of the boar are used to make hairbrushes, paint bruises and shaving brushes.

The most famous wild boar in Italy is Il Porcellino, a bronze fountain sculpted by Pietro Tacca in the 1600s and located near Florence’s mercato nuovo. Visitors to Florence put a coin in the boar’s mouth and let it drop to the grate below. Legend says that rubbing the boar’s snout ensures a return to Florence (a tradition that was noted already in the mid-1700s.)

EVOO is derived by cold mechanical extraction and must have less than 0.8% acidity. The lower the acidity, the better the quality of the oil. For a superior oil, olives in Tuscany are harvested by hand in late October/early November. The earlier the olives are harvested, the richer the oil is with healthy polyphenols. The oil also has a peppery bite which is indicative of high quality.

There are several varieties of olives in Tuscany which include leccino, frantoio, moraiolo and coreggiolo. Most olive oils on the market are a blend, though some producers make mono-varietal oils. EVOO should be stored in a cool, dark place and unlike wine, it doesn’t improve with age. Beware of storing your oil in a clear bottle—a dark, green bottle or a can is a better choice to protect it from the light.

Try it at home:

To sample your freshly-pressed EVO, toast a piece of white bread (remember that Tuscan bread doesn’t have salt), rub the toast with some fresh garlic, drizzle with a good amount of EVOO and top with salt. Buon appetito!

Feeling inspired to taste your way through Tuscany? Get in touch with Courtney to see how she can craft your perfect Italian holiday.