14 Things to do in Kyoto

Formerly the imperial capital of Japan, the City of 10,000 Shrines offers visitors an abundance of history and culture. Below are some of my favourite things to do in Kyoto that will give you a sense of the city and its centuries of history.

14 Immersive Things to do in Kyoto

Nanzenji was built as a retirement villa for Emperor Kameyama in the late-13th century. In 1291, he donated it to the Rinzai sect of Zen Buddhism, and it became the head monastery in Kyoto. The temple’s chief priest holds the highest Buddhist position in the nation.

The temple suffered badly from both fire and war over the centuries, and the existing buildings are no more than 400 years old. The inner Hojo Garden is characteristic of the Edo period and is considered one of the most scenic Zen gardens in Japan. The worn wooden hall along the garden has seated many monks and travellers in quiet contemplation.

The magnificent Sanmon Gate leading to the temple serves as the stage for the kabuki re-enactment of the story of the Japanese Robin Hood, Ishikawa Goemon. In 1632, Goemon’s luck ran out and he and his son were sentenced to death by being boiled alive. As the play depicts, the heroic Goemon held his son above the boiling water until he succumbed himself.

From Nanzenji, there is a 1.6 kilometre (1 mi.) canal pathway all the way to Ginkakuji Temple. The path is dedicated to Nishida Kitaro, the late-19th c. philosopher of Western and Zen ideologies.

Ginkakuji was originally built as a retirement villa and later converted into a Zen temple. The 15thC shogun, Ashikaga Yoshimasa, designed it after his grandfather’s villa, Kinkakuji (Gold Pavilion). The silver finishing was never completed, but the temple retained the name nonetheless. Yoshimasa was a patron of many fine arts. Under his initiation, Higashiyama Bunka (Culture of Eastern Mountains) flourished. He became a monk at the age of 32 and died five years later, leaving his villa to Zen Buddhism.

On this mountain, the Japanese character for “big” (dai) is set in white stone and can be seen from nearly all points in Kyoto. Ginkakuji Temple is located at the base of Mt. Damonji, where a trail begins. From the highest point on the trail, the view of Kyoto is very impressive.

On our Tokyo to Kyoto Biking trip, meander ancient Japan’s coastline and visit kimono makers, bonsai tenders and ryokan guest houses. Stop now and then to gaze at rice paddies, visit Buddhist shrines, and at the end of the day take a dip in the hot-spring onsen baths. 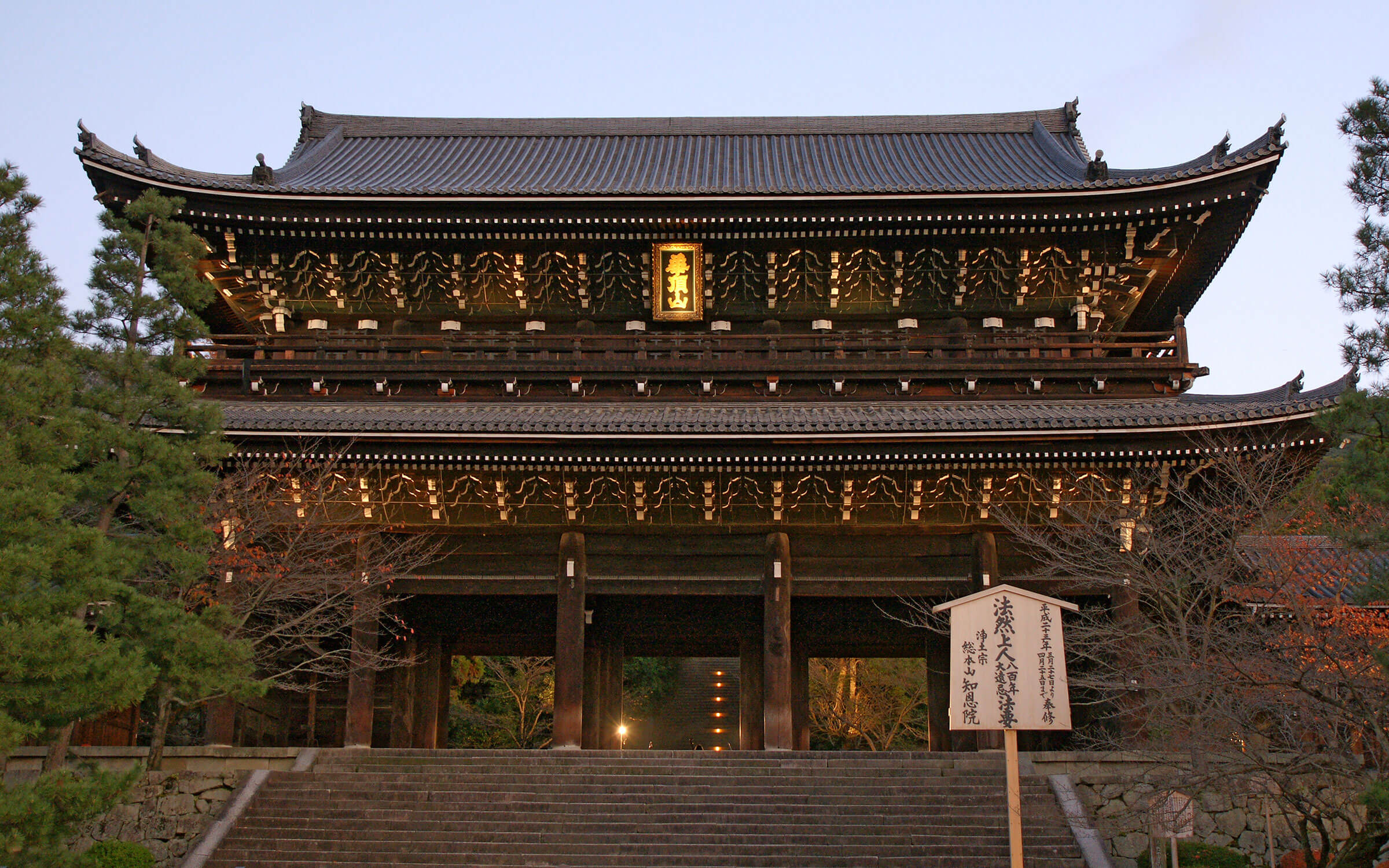 The gate to the Chion-in Temple is the largest temple gate in Japan. It dates back to 1619. Inside the gate there are two sets of stairs leading to the temple grounds. The shallow, narrow stairs to the right are for women, and the deeper, wider stairs in the middle are for men. (The reason the stairs are narrower for the women is that they had to walk in tightly wrapped kimonos, that seriously restricted the length of their strides!) Chion-in is the head temple for the Jodo sect of Buddhism. With a little luck, you can observe a priest performing a ceremony and chanting prayers.

This city park is full of vendors, tourists and Japan’s most photographed cherry tree. It is located in the centre of the park and has been painted white—although there’s no consensus on why. Some say it’s to keep insects away, others say that it’s for aesthetic reasons.

This area was once a reclusive retreat with extravagant villas. Inns and teahouses took over, and the street became the regular haunt of geishas and their guests.

Kannon, the goddess of mercy and compassion, is the most popular Buddhist deity amongst the Japanese. She is a bodhisattva, one destined to become a Buddha; however she is waiting for all others to achieve enlightenment before she takes the final step herself. 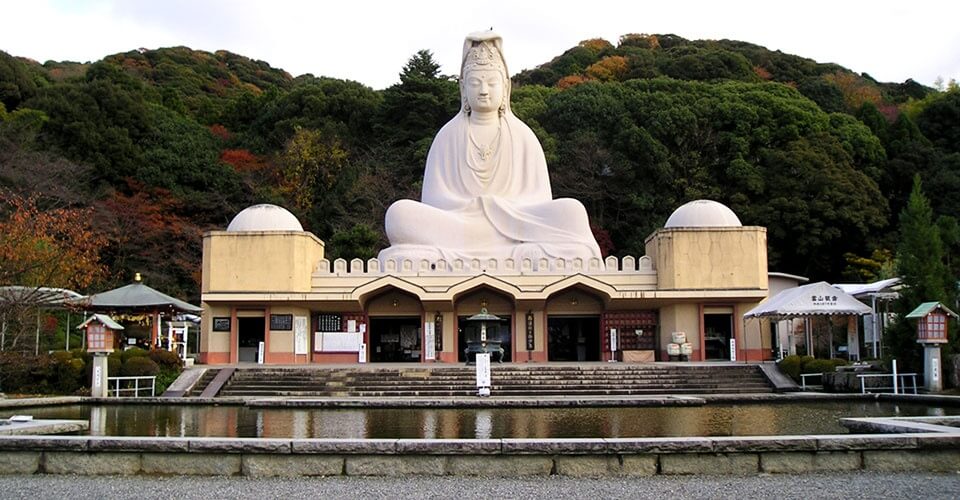 She is said to have 33 emanations and has countless temples dedicated to her. This statue of Kannon is quite recent, demonstrating that the faithful are still willing to fund costly sculptures, even in the modern era.

Sanneizaka is a cobblestone street on the way to Kiyomizu Temple. Along it are stores that sell food, tea and mementos to pilgrims and travellers. The merchant homes and shops here are among the oldest in Kyoto, and the earthen slatted windows on the second floors are among the oldest architecture in the city. These windows were built to allow merchants to secretly keep their head higher than that of their lord—a forbidden act in feudal Japan. This district is also home to kiyomizu-yaki, elegant, hand-painted pottery collected by feudal aristocrats.

Enchin, an 8thC Buddhist priest from Nara, founded Kiyomizu Temple at the source of the Kizu River, after being instructed to do so in a vision. The temple was first constructed in 780; however, most of what exists today dates back to 1633. The most famous spot is the butai—the deck overlooking the forest (“to leap from Kiyomizu’s butai” is a Japanese saying that refers to making an important decision or performing a courageous act).

The temple is dedicated to Kannon and women pray to her for ease in childbirth, students pray for good grades, and young women and men pray for luck in love. Pilgrims and tourists alike drink from otow-no-taki, the “Sound of Feathers Waterfall,” to purify themselves and to protect their bodies from illness.

This pagoda is all that remains of what was once a magnificent Buddhist temple. It is five storeys high, and each storey is symbolic of earth, water, fire, air or heaven.

Visiting this district, the epicentre of Japan’s remaining geisha culture, is one of my favourite things to do in Japan. Only the most exclusive men are granted audience here. Gion is also a fascinating window into Japan’s feudal past, where a life in pursuit of the perfection of one’s art was treasured above all.

With increasing competition for entertainment dollars, teahouses are finding it difficult to remain afloat. There are only about fifty geisha in Gion today; however, at its height, there were hundreds of geisha, as well as managers and apprentices.

In feudal times, geisha were often girls from impoverished fishing and farming villages. The lucky few, so to speak, became geisha, while the less fortunate created a living as prostitutes in the Shimabara pleasure quarter.

Geisha are professional performers. They are trained in shamisen (a Japanese harp), tea ceremony, dance, song and the art of witty conversation. Gentlemen who are granted the right to their company are a privileged few, and they meet these cherished ladies at an o-chaya, a teahouse.

A maiko, or apprentice, accompanies and pours sake. In the past, each geisha hoped to achieve a danna, a “lord and master,” who would care for her material needs. He would essentially purchase her virginity. However, times have changed and sexual pleasures are no longer for sale.

The most iconic teahouse of Gion is the legendary Ichiriki Teahouse. This 300-year-old o-chaya retains the burnt-orange colouring once characteristic of all the Gion teahouses.

In summer she is cooling herself by the Kamo, How fair is her neck revealed in the twilight. Her lips burn like bon-fires on Mt. Daimonji, Though she hides her secret tears behind a small lantern.

—A song for Gion 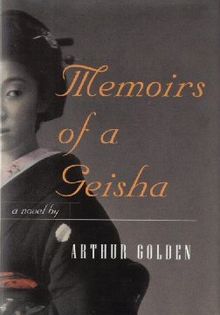 The current building was renovated a century ago after being damaged by the great fire of 1865. The name o-chaya, or “tea-house,“ is a bit misleading for English speakers since Ichiriki is not exactly a place to go and have a casual cup of tea. It is an invitation-only establishment, and in order to visit, it is necessary to have a relationship with the teahouse. Ichiriki is the setting for the novel Memoirs of a Geisha and the kabah drama, Chushingura. Set during feudal times, the play tells how the leader of the 47 ronin (masterless samurai) spent years in seeming debauchery within the walls of the teahouse, all the while plotting to avenge the death of his master.

Cities Things to do in Kyoto See + Do