In Deep: A (Brief) History of Laos

Sandwiched between the neighbouring countries of Vietnam and Thailand, landlocked Laos also borders Myanmar and China to its north, and has largely been overshadowed by its neighbours. But to know Laos is to understand its slower rhythms,  To know the history of Laos is to hear a tale of exile, secret wars, warring kingdoms and now-toppled colonies. Here’s a (brief) look into the history and culture of what was one of the largest kingdoms in Southeast Asia.

The Lao people were a tribe originally from Yunnan, China, who were pushed south to the border of the Khmer empire in the 13th century. The first Lao kingdom, called Lan Xang or “land of the million elephants,” was founded by Fa Ngum in 1353.

Origins of the Lao Kingdom

Fa Ngum was born into the royal family in Muang Sua, the capital of a small state ruled by King Souvanna Khampong. When Fa Ngum was a baby, his grandfather, the reigning king, expelled Fa Ngum’s father (the heir to the throne), for failing to live up to his princely responsibilities. The family sought refuge at Angkor and thus Fa Ngum was raised in the cradle of the Khmer empire.

As a grown man with a Khmer princess wife, Fa Ngum fought his way back along the Mekong Valley to regain his birthright in Muang Sua and to establish the unified Lao Kingdom. In an attempt to unite the various ethnic groups under the kingdom, he introduced Theravada Buddhism. His father-in-law, the Khmer king, sent Buddhist scholars and scriptures, as well as a sacred golden Buddha called Pra Bang. Pra Bang was considered a symbol of the right to rule Laos. It was placed in the capital, Muang Sua, which was renamed Luang Prabang in honour of the sacred image. For the next 200 years, Luang Prabang was the religious and cultural centre of the kingdom.

From the famed limestone islands of Ha Long Bay to the UNESCO-protected, colonial architecture of Luang Prabang, explore Southeast Asia’s most spectacular gems on our Vietnam & Laos Biking trip.

A Clash of Kingdoms

Over the years, Lan Xang armies won and lost territory from the Khmer, Burmese, Vietnamese, Thai and Chinese in Yunnan. By the 17th century, its holdings were quite sizable. However, its power began to crumble in 1694 when King Souligna Vongsa died without an heir. Internal strife, spurred on by various neighbours, ultimately split Lan Xang into three kingdoms: Luang Prabang in the north, Vientiane in the centre and Champassak in the south. The rivals never stopped quarrelling and were easily invaded and overrun, particularly by the Siamese who, by the end of the 18th century, controlled most of present-day Laos and Cambodia.

Siam ultimately ceded the territory of Lan Xang (and of the Khmer) to French Indochina in a bid to maintain its own independence—which worked. The French reunited the three territories and called the new protectorate Laos, from les Laos, the plural form of the Lao people. Siam retained what is now Northeast Thailand, or Issan, where many Lao people lived then and still do. Today, there are more Lao people living in Issan than in Laos itself.

Under the French, there was little real development in what they called the “land of the lotus-eaters.” Few roads were built, no universities were opened and there was little improvement in health care. The mountains posed a barrier to plantation farming and the Mekong was not suitable for merchant vessels. About the only real commercial activity was the export of opium. In all of Laos, there were only a few hundred French. The colonizers preferred to import Vietnamese to staff the administration while the Chinese engaged in trade. For the average Lao peasant farmer, life was little changed.

French Indochina fell briefly to the Japanese in World War II. When Japan surrendered in 1945, the Lao Issara (“Free Laos”) movement, led by the king’s nephew, declared independence. The king, however, sided with the French and the experiment quickly ended with the French returning. In 1953, the French granted independence to the Royal Lao Government, but an offshoot of the Lao Issara, called Pathet Laos, felt it was only a puppet government so it created a resistance group backed by communist North Vietnam. When the French suffered a final defeat in Vietnam in 1954 and withdrew from Indochina, the U.S. started supplying the Royal Lao Government with arms.

Role in the Vietnam War 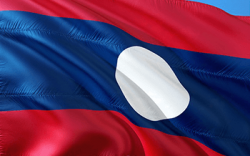 At the second Geneva conference in 1961-1962, Laos declared itself neutral in the hope of avoiding future international conflicts, but this too was not to be. By the 1960s Laos was dragged into the Cold War, mostly because of its geopolitical position beside Vietnam.

While the entire world watched the U.S.-Vietnam war, few knew that a “secret war” was also being waged in Laos—with even more devastating results. Laos suffered the heaviest bombings of any country in history.

At the end of the wars, there was an attempt at a coalition government between the communist Pathet Lao and the royal government, but as soon as Saigon fell in April 1975, the Pathet Lao, backed by North Vietnam, took control of Laos with little opposition. On December 2, 1975, the king was deposed from Luang Prabang, Buddhism was removed as the state religion and the communist Lao People’s Democratic Republic was established and remains the only party. In the 1990s, Buddhism was reformed and reinstated as a way to promote Lao nationalism.