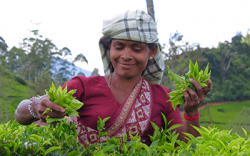 Its traditional name meaning ‘Lanka the blessed’ in Sinhalese, once you arrive in Sri Lanka, you’ll see exactly why this island has been attracting visitors for centuries.

Historically once known as Ceylon (when it was under British colonial rule—including its renowned tea plantations and estates), the island has been inhabited as far back as 125,000 years ago.

In 2009, a thirty-year civil war ended, with the Sri Lankan army prevailing over the Liberation Tigers of Tamil Eelam.

The present-day capital of Colombo, due to its geographical position on a natural harbour, was well-known to traders over 2,000 years ago.

Arabs settled in the area around the 8th century AD as the port helped their business, allowing them to control the trade between the Sinhalese kingdoms and the rest of the world. In the 14th century, the famous traveller, Ibn Batuta, visited the island, referring to it in his notes as “Kalanpu.”

Due to its position as a port, Colombo was occupied by the Portuguese, Dutch and British during their attempts at ruling Sri Lanka.

Today, Colombo is a bustling modern city and the commercial capital of Sri Lanka. Because of the city’s history as a Portuguese, Dutch and British outpost, as well as its native Sinhalese roots, the city has many stylistic and cultural influences.

The city is highly multicultural, with a mix of Sinhalese, Sri Lankan Moors, Tamils, Malay, Chinese, Indian and Burgher ethnic groups as well as a large number of European ex-pats.

Historical architecture from the many eras of Colombo’s past fills the city, such as the neoclassical style of the National Museum, the Colonial Galle Face Hotel, the Doric Wolvendaal Church, the Colombo Fort—shaped by all three invaders, and various Buddhist dagobas or stupas.

Juxtaposed with the historical buildings are the markings of modern infrastructures, such as the World Trade Centre, the Bank of Ceylon Tower and the innovatively designed National Performing Arts Theatre.

Keeping its Portuguese name, Beira Lake is in the central business district of Colombo and is home to storks, pelicans, lizards and various fish.

The lake was heavily used during the Colonial era of both the Portuguese and English to transport goods in the city. Resting next to the lake sits the Gangaramaya Temple, one of the most important Buddhist temples in Colombo.

For both Buddhists and tourists alike, the lake is somewhat of an iconic area in the city, which makes for a perfect photo opportunity as the many impressive surrounding buildings reflect in the water.

Galle dates back to 150 AD, when the city existed as the main port on the island of Sri Lanka, trading with ancient Greeks, Arabs and Chinese.

The port remained the biggest area for trade during the 16th century when the Portuguese arrived.

Fortifications began during the Portuguese era and were continued by the Dutch in the 18th century when the city reached the height of its development.

The Galle Fort is a UNESCO World Heritage Site and is the largest fortress in Asia built by European invaders.

Galle is very picturesque; its dramatic history and beautiful surroundings continue to capture the imaginations of the many artists, writers, designers and photographers who inhabit the fort area of the city.

Sri Lanka’s second-largest city after Colombo and the last capital of the ancient kings’ era of the island, Kandy has huge cultural and historical significance, dating back to the mid-1300s.

Kandy was the location of the resilient Kingdom of Kotte, which finally succumbed to British colonial rule in 1815.

These days, Kandy is very much a hub city, with many businesses having large branch offices and with shopping malls boasting large international brands.

Like much of Sri Lanka, Kandy is marked by the colonial area, with much of the original city destroyed during the invasion.

That said, a number of buildings from the former Kingdom of Kandy still stand, with the best-preserved being the Lankatilaka Vihara temple.

The Royal Palace of Kandy also still stands, housing the Temple of the Sacred Tooth.

Temple of the Sacred Tooth Relic

The Temple of the Tooth is a Buddhist temple in Kandy and is home to the relic of the tooth of the Buddha.

According to Sri Lankan legend, when the Buddha died in 543 BC, his tooth was extracted by his disciple, Khema, and given to King Brahmadatte in the city of Dantapuri, henceforth remaining a royal relic.

Belief grew that whoever was in possession of the tooth relic had the right to rule the land, thus provoking tension and wars over the ages. Because of the constant battle to keep the tooth, it has had many homes and shrines built in its honour.

The tooth first came to Kandy in the late 1500s, when the original Temple of the Tooth was built, however, it was later taken away to protect it from the Portuguese.

The tooth was returned in the time of Rajasinha II (1629-1687), the third king of Kandy. A new temple was reconstructed, although attacked several times, leading to many partial re-builds.

The temple is a most holy place for Buddhists and is extremely culturally significant. It is mainly due to the temple that Kandy was declared a UNESCO World Heritage Site in 1988.

Home to the impressive Sigiriya Rock, also known as Lion Rock, Sigiriya is an ancient city dominated by a 200-metre column of rock.

One of the shortest-lived capitals in history, Sigiriya was chosen by King Kasyapa as his palatial home. Building a castle on the top of the huge rock, the king had a vast lion carved into the stone and giant frescoes painted on the walls.

The capital and palace were abandoned following the death of the king in 495 AD and the building was used as a Buddhist monastery until the 14th century, after which Sigiriya was somewhat forgotten for several hundred years.

These days, Sigiriya is listed as UNESCO World Heritage Site and the ancient gardens on display at the palace are an example of some of the oldest landscaped gardens in the world.