Bhutan, Land of the Thunder Dragon

If you are fortunate enough to make your way to Bhutan, a largely Buddhist country (although some Hinduism is practiced), it’s worth getting to know the spiritual traditions of this deeply devout people. Known for its reliance on measuring Gross National Happiness over all else, Bhutan is also called the land of the Thunder Dragon, a reference to its wild thunderstorms striking the valleys from the peaks of the Himalayas. The dazzling light of thunder was believed to be the fire from a dragon. Learn about Bhutanese culture through its main religion, Buddhism, and its main beliefs.

Symbolism in a Flag

The upper half of the national flag is yellow, signifying action and the secular authority of the king. The lower half is orange to represent the spiritual power of Buddhism.

The druk (white dragon) honours the thunder dragon, after which the country is named; white also symbolizes purity. The dragon clutches jewels in his claws as a symbol of the country’s wealth.

In the Thunder Dragon Kingdom adorned with sandalwood,

The protector who guards the teachings of the dual system,

He, the precious and glorious ruler, causes dominion to spread,

While his unchanging person abides in consistency,

As the doctrine of the Lord Buddha flourishes,

May the sun and peace of happiness shine on the people.

The Origins of Buddhism

The origins of Buddhism come from India: the prince Siddhartha Gautama was born into a privileged and sheltered existence. It was immediately apparent to some that Prince Siddhartha was more than just a prince, but his parents did not want him to discover this, so he was kept in isolation.

A sage predicted that the prince would either become a powerful king or, if he embraced religious life, a great spiritual leader. When he was finally exposed to the pain and suffering of the outside world, he decided to become an ascetic and wandered the world in an attempt to find a way to end all suffering. He finally reached enlightenment and became the Buddha while meditating under a banyan tree.

His dharma, or teachings, includes the Four Noble Truths and the Eight-Fold Path to Enlightenment. The long-standing debate on Buddhism concerns whether it is, technically, a religion. The answer lies in the definition of religion, since Buddhism shares many characteristics with traditional religions, but it neither acknowledges nor denies the existence of a god.

In Bhutan (as well as in Tibet, Nepal, and the Himalayan regions of India), the ‘second buddha’ many people revere is Padmasambhava (meaning ‘lotus-born’; he was reported to have been discovered as a child floating in a lotus blossom), an 8th-century Indian Buddhist master who is credited for bringing the religion to Tibet and the region. Legend has it that he flew to what is now Paro Taktsang (the Tiger’s Nest monastery) in Bhutan on the back of a flying tiger, and meditated in a cave, which you can see today.

Buddhists believe in the following truths, and pathways to enlightenment:

The Noble Eightfold Path to Enlightenment

To reach a state in which there is no suffering, one must follow a path. The stages of this path are as follows:

We’re lucky enough to be among the 14,000 visitors granted permission to enter Bhutan each year—and we’re happy to share our good fortune with you. On our Bhutan Hiking, life-altering moments and Gross National Happiness await at every turn.

The vivid richness of Bhutanese culture, from daily Buddhist rituals to centuries-old temples, is one to witness firsthand. On our Bhutan Cultural Journey, marvel at the astonishing Tiger’s Nest monastery and other wonders in the Land of the Thunder Dragon. 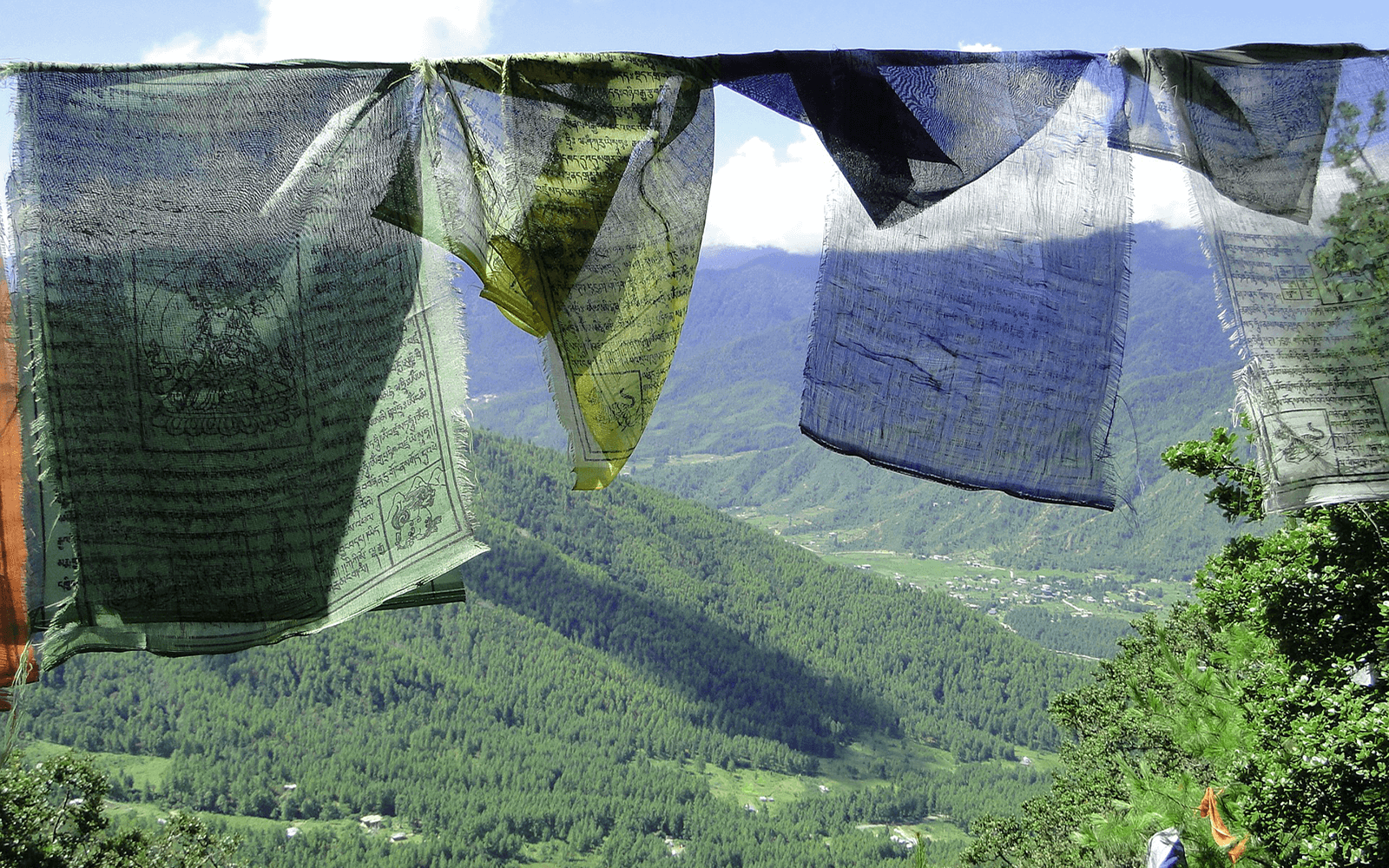 Also known as Hinayana, the “doctrine of the elders,” Theravada Buddhism is practiced in Thailand, Sri Lanka and Burma. This school professes that the path to nirvana (or enlightenment—the aim of all Buddhists) is an individual one. The worship of deities is considered to be secondary. Individuals work toward breaking the cycle of rebirth by following the teachings of Buddha.

In Mahayana, “the great vehicle,” the belief is that one seeks nirvana, not for personal gain, but to help others. The most important virtues are compassion (coupled with a genuine desire to alleviate suffering) and wisdom. The Buddha is seen as a supramundane principle and has many different realms. There is also a pantheon of cosmic and celestial buddhas and bodhisattvas. A bodhisattva is an enlightened being who delays entry into nirvana to help others on the path to enlightenment.

This emerged in India as a further evolution of Mahayana Buddhism during the second to fourth centuries. In Vajrayana (which means “thunderbolt vehicle”), there is a Tantric, or dual energy, a manifestation also found in many elements of Hinduism. It espouses that one must learn to transcend opposites and view them as dual manifestations of consciousness. It also teaches the harnessing and channelling of different energies in the body. The aim of Tantric practice is to transform one’s mind, body and speech to reach the state of a fully enlightened being by special yogic means. This includes a variety of esoteric and ritual methods only available to the initiated. Today, Tantric Buddhism is found only in Tibet, Ladakh, Mongolia, Nepal, Bhutan and Japan.

This school of Buddhism was founded in Tibet by Tsangpa Gyare Yeshe Dorje (1161–1211). It was introduced to Bhutan in the early 13th century by a lama from Ralung Monastery, Phajo Drukgom Shigpo. In the 17th century, the Shabdrung Ngawang Namgyal recognized the Drukpa Kagyu school as the official state religion.

With stints living and working in Myanmar and Thailand before becoming B&R’s Regional Director for India, Karen MacRae’s resumé racked up nearly as many pages as her passport. After 10 years in Asia, she now distills her passion and knowledge into exceptionally curated experiences as a Private Trip Designer.