Insider's Guide:
14 Things to See & Do in Bordeaux

As you might expect from one of the largest metropolitan areas in France, there are plenty of things to do in Bordeaux that will reveal how it earned the moniker La perle d’Aquitaine (The Pearl of Aquitaine).

The city’s layout can seem a bit like a labyrinth for the first-time visitor, but it’s a great place to lace up your walking shoes and explore.

A Few of Our Favourite Things to do in Bordeaux

This pretty square is in many ways the center of Bordeaux, and is surrounded by good shops and restaurants (although during the Revolution, the park was the location of the guillotine…).

Surrounded by good shops and restaurants, this pretty square is in many ways the centre of Bordeaux. It’s come a long way since the French Revolution, when the park was home to the city’s guillotine!

A fantastic street for luxury shopping in Bordeaux.

One of the oldest wood-frame opera houses in Europe not to have burned down or required rebuilding. Built in the area where the Roman Forum once stood, the theatre was constructed on the remains of the Roman Temple.

The theatre was also once flush with the old city square, but in 1846 an engineer named Thiac decided that elevating the theatre would accentuate its presence. As the theatre couldn’t easily be raised, the surrounding ground was instead scooped out.

After the square was lowered, the theatre’s front steps were added. The interior of the building reflects the somewhat gaudy style of Louis XVI that was popular when the theatre was redesigned in the 19th century. Its most recent renovation was in 1991.

We begin our Bordeaux to Dordogne Biking trip in Bordeaux, where the riding is as smooth as a Château Mouton Rothschild (you’ll understand soon enough). Then, it’s eastward to the Dordogne Valley, land of medieval castles, Cro-Magnon cave paintings and exquisite cuisine.

This enormous square was once the site of Château de la Trompette. The square’s most prominent feature is the fountain monument known as the Girondins Column, with its bronze horses.

Erected in the beginning of the 20th century, the horses were stolen by occupying German forces in 1943, presumably to be melted down; in 1945, however, they were rediscovered in Angers. Restoration was finally completed in 1983.

Bordeaux owes much to this river, as it was along the Garonne that was used to ship wine from the region up to England, leading to the city’s economic prosperity. Even today, Bordeaux’s port remains one of the most important in all of Europe.

Enjoy a stroll along the boardwalk; follow it until you arrive at the Place des Reflets—a dynamic fountain and pond—which you will find full of children on any sunny afternoon. 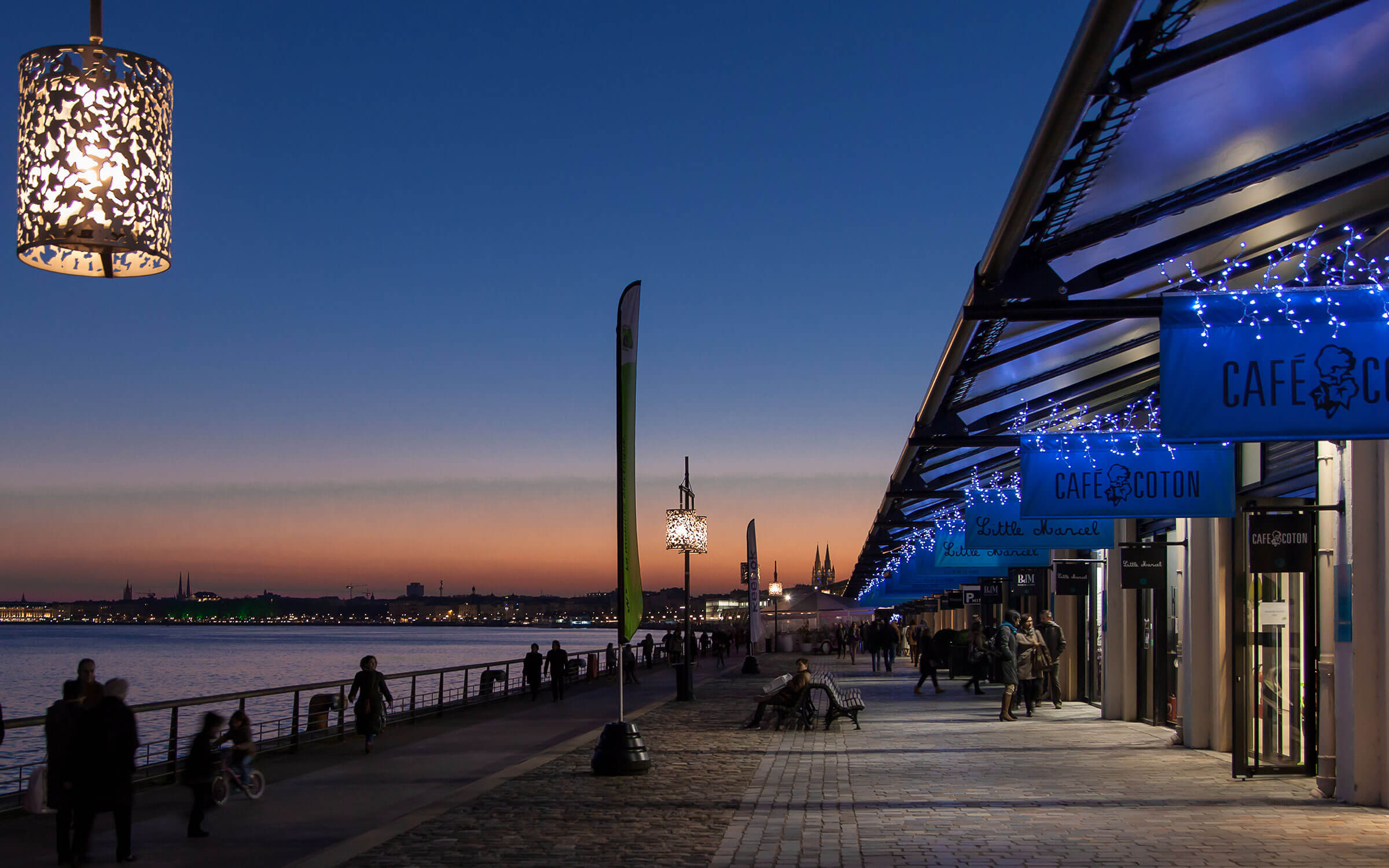 This gateway, built in 1495 on the site of an ancient city gate, was erected to commemorate several successful battles in Italy in which Bordelais noblemen had played important roles.

Just off rue Ausone, this is the street where wine and grain merchants used to sell their wares. Building number 25 was the home of the philosopher Montaigne, who was once also the mayor of Bordeaux.

This gateway, completed in 1755, was dedicated to the Dauphin’s son, the Duke of Burgundy. It replaced a 14thC gate that controlled access into the city.

After Paris, Bordeaux has more preserved historical buildings than any city in Europe.

A bridge constructed by Napoleon in 1821 so that his army could cross the river to travel down to Spain to fight. Interestingly, there is one arch on the bridge for every letter of Napoleon Bonaparte’s name.

Originally the site of a poultry market, this entire neighbourhood, comprising the streets St-Pierre, Argentiers, Bahutiers and Passage St-Georges, are filled with interesting cafés and restaurants.

Grosse Cloche, aka the Great Bell, originally hung in the Carmelite Convent. It is from this belfry that the town crier proclaimed communal news in the 15th century and announced the beginning of the grape harvest. (In fact, this is the second bell; the first was smashed by King Henri II in 1548 to punish the locals for a tax revolt.)

The Basilique St-Michel dates back to the 15th century; at 379 feet, the tower in front of the basilica is the tallest building in southwest France. Every morning, an interesting market spreads out around this tower, and it’s worth poking around. The antique/old junk theme continues in the Passage St-Michel warehouse on one side of the square.

Just past the Great Bell on the Cours Victor Hugo you will soon meet up with rue Ste-Catherine. This pedestrian street was originally the principal north-south road in Roman times (known as the cardo maximous). Today, it is the busiest street in Bordeaux.

This cathedral was built between the 13th and 15th centuries and is the place where Eleanor of Aquitaine married her first husband, the future Louis VII.