The 8 Best Cycling
Routes in France

We’ve been riding through France for decades and as you can imagine, we’ve learned a thing or two over the years. But knowledge, like life and fine wine, is better shared. That’s why we’re happy to present the eight best cycling routes in France (in no particular order).

The Hautes Côtes and the Vallée de l’Ouche

Old World wine regions offer some of the best recreational cycling on the planet; vines tend to thrive in scenic and hilly (but not mountainous) countryside, wine towns tend to be small, un-industrial (no heavy truck traffic) and cultured, and where there is good wine, it’s generally a safe bet you’ll find good food.

Cycling northwest from Beaune into the Ouche Valley is spectacularly beautiful. The landscape (and the riding) on this route is some of the best in Burgundy. Make your way along quiet country roads passing through the villages of Nantoux and Bessey-en-Chaume. The terrain is hilly in parts and quite flat in others, providing a perfect blend for almost any level of cyclist.

End with a loop ride that takes you past wooded valleys and small farms that surround the Abbaye De La Bussiere. Finish by riding up to the magnificent castle of Châteauneuf. This perfectly preserved medieval site dates from the 11th century, and the village is deservedly considered one of the “prettiest villages in France.”

As the stretch between Germany and France, the Alsatians have taken words, wines, customs and myths from those who pass through their region either making war or staking claim on the territory. Alsace is the result of countless years of mixing cultures, people and the indomitable character of the Alsatian locals. It’s also one of our favourite regions of France to explore on two wheels.

In Alsace, you have no choice but to ride on winding roads through vineyards and historic towns. Start by heading south from Ottrott to Illhaeusern following the Route des Vins, travelling along small winding roads past countless colourful villages hidden amongst the vines. In Andlau, stop and marvel at the imagination of those who carved the church’s 12thC frieze, and in Mittelbergheim soak up the charm of one of France’s most beautiful villages.

The ride to Illhaeusern takes you through the wilderness of the Grand Reid, a haven for wildlife liberally dotted with ancient Gallic burial mounds. Finish your route at Hôtel des Berges and enjoy a meal at the hotel’s famed 2 Star Michelin restaurant.

Ride France For Yourself

From Normandy in the north to the southern shores of Provence, we can help you pedal every part of this incredible country, and introduce you to a few of our local friends along the way. (Private wine tasting, anyone?) Use the button below to view our full portfolio of France biking trips.

Due East along the Dordogne River

Prepare yourself for some of France’s best cycling, where the riding is as smooth as a Château Mouton Rothschild. Set out from Saint-Emilion and embark on a day-long traverse to the Bergerac region. Take a quick pit stop in Castillon-la-Bataille, the site of the final Battle of the Hundred Years War ending in the defeat and the final expulsion of the British from Aquitaine. After the short history break, press on and follow the Dordogne River’s meandering banks.

In Sainte-Foy-la-Grande, a town that straddles the departments of the Dordogne and the Gironde, stop for lunch on one of the town’s many terraces. After lunch, the route follows the Route des Vins into the AOC vineyards of Bergerac and Montbazillac, famous for its dessert wine. End with a final push to the top of a hill, and arrive at the Chartreuse du Bignac.

The Touraine and Vienne River

The picturesque Loire’s castle-lined routes have long been the playground of kings and queens, and the small country roads are perfect for biking.

Cross through typical Touraine landscapes and pedal along the Indre River towards the village of Azay-le-Rideau. Park your bikes and tour the many châteaux, taking in the Renaissance architecture. Lunch in front of the castle at Côté Cour restaurant is a must. After lunch, cross the Vienne River and arrive at the imposing gates of Château du Rivau for an opportunity to wander at your whim or will through the magnificent gardens.

We’ve been enjoying every well-trod trail and much-visited town on our Provence Biking trip for decades. On this route, however, we stray outside the region’s hotspots to show you our favourite hidden gems.

Start in the heart of the Petit Lubéron valley. The ride will be like the sea on a strong Mistral day: a flat mirror interrupted by steep (but short) waves. Pass through the spectacular village of Bonnieux before continuing downhill and across a 2,000-year-old Roman bridge (Pont Julien, pictured below). 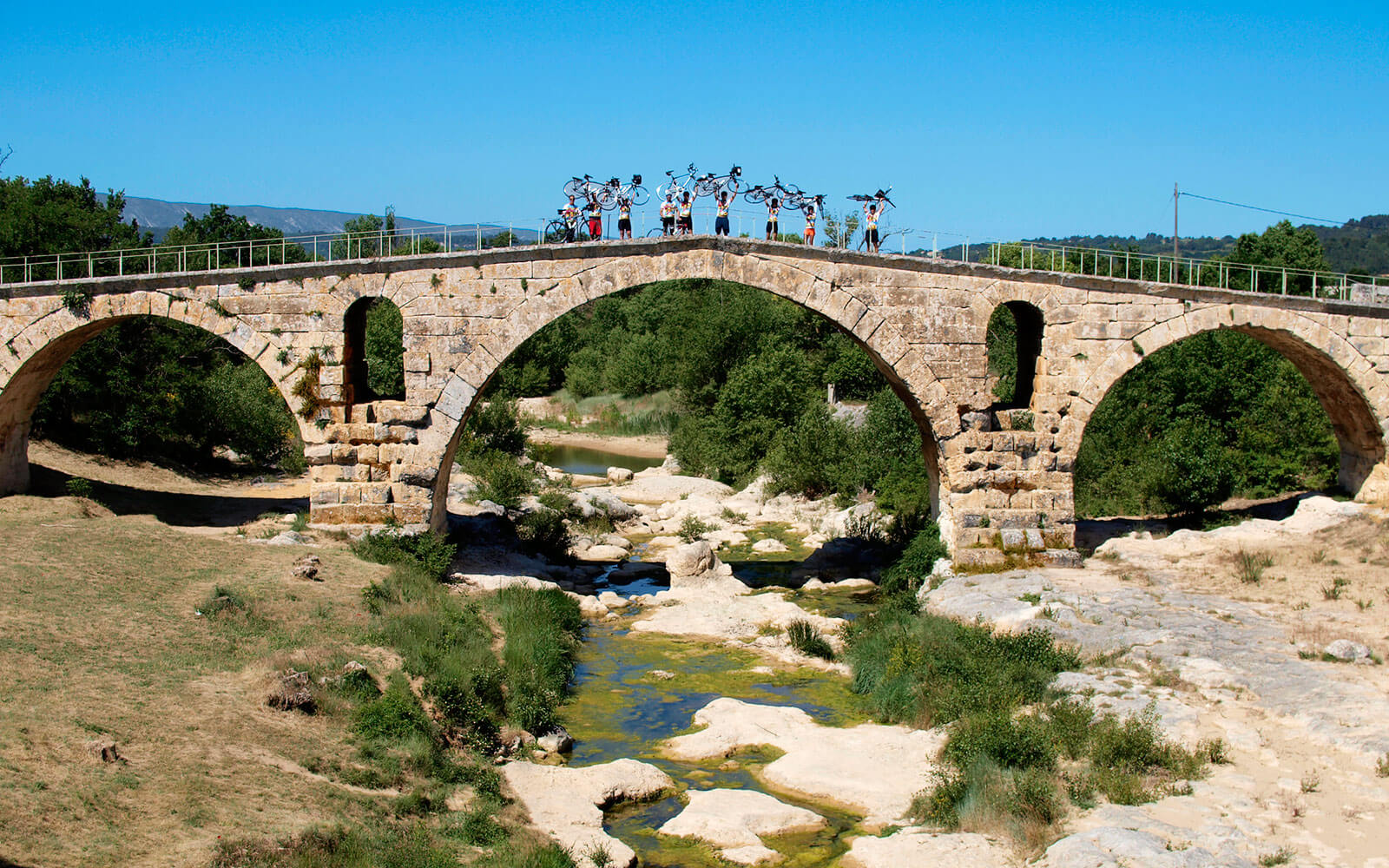 After this historical crossing, bike up to the spectacular but hidden village of Goult, in which the main square is filled with inviting cafés and shops teeming with wonderful goods. After a quick stop, ride to an exclusive wine domain, owned by none other than the mayor of Ménerbes: the Domaine Ruffinatto. Finish the route with a short trip back to La Bastide de Marie, Ménerbes.

This region offers incredible diversity and beautiful scenery along quiet roads that cyclists continue to rave about years after their first ride. Starting in Saint Cirq Lapopie, a small but stunning village, embark on a nearly 100-km journey to the village of Conques. This ride, although long, is arguably the most beautiful route heading upstream of the Lot.

Expect a few steep climbs as you ride on the right side of the river bank. Taking your time on this century ride is highly recommended, there are plenty of small villages along this route that are perfect for a long lunch. Your final stop will be Conques, which is best-known for the relics of Sainte Foy, whose presence has made it a major stop on the Camino de Santiago from the Middle Ages until today.

Ile de Ré is one of the most famous and fashionable islands along the French Atlantic Coast, nestled secretly between Brittany to the north and the vineyards of Bordeaux to the south. This island route on our Atlantic France Biking trip features wonderfully flat biking along the sea on dedicated bike paths.

Riding along the ancient salt road, or Route du Sel, this scenic loop takes you to the top of the island and back. Pedal down virtually untouched villages such as Ars-en-Ré, Saint-Clément des Baleines or La Couarde and continue on to the hidden villages of Loix and Les Portes before looping back to the port city of Saint Martin de Ré.

Though every region of Europe boasts a long history, Normandy has been deeply shaped by two watershed moments that are pillars of European history and culture: the Battle of Hastings in 1066 and the Allied landing on June 6, 1944. Discovering this region is like turning the pages of a history book while riding through lush fields and along white-sand beaches.

Ease into the pace of seaside life on this route. First, ride inland through the famous horse-breeding farms of the area. Deep forests alternate with lush prairie as you descend into Deauville, an elegant resort often called the “Parisian Riviera” for its casino, stately buildings, and annual film festival. There are plenty of options for lunch along the seafront. Continue across the bridge into its sister town Trouville, which preserves the simple fishing village traditions of the coast. Follow the shore back to Honfleur, whose colourful facades inspired the Impressionists.

Browse our full portfolio of bike trips in France or feel free to reach out to our Bespoke travel team to plan a custom bike trip of your own!