Insider's Guide:
Things to Do in Honfleur

A quintessentially Norman town, Honfleur’s picturesque inner harbour is surrounded by tall half-timbered houses with pewter-coloured slate roofs. Use the itinerary below to delve deeper into a city rich with history and Norman pride.

From the Sorel monument, walk away from the harbour and turn left into the Rue de la Ville after about 100 m. Continue straight until you reach the Place Arthur Boudin in the Quartier de l’Enclos (point A on the map below). This is the centre of the old and formerly fortified town of Honfleur. The square is still surrounded by charming older houses. Some of the gables have the chequered patterns of stone and flint stone characteristic to the area.

Nearby, back in the Rue de la Ville, you’ll see the Greniers à sel. These 17thC “fortified” warehouses were built by the state to safely store the valuable salt needed to preserve cod. Opposite the beautiful Rue de la Prison, with its old houses and the Musée du Vieux-Honfleur (B), is Honfleur’s former prison, with reproduced interiors of Norman houses on show. This leads to the St-Etienne church and the Vieux Bassin. Not used for worship since the French Revolution, St-Etienne now houses the Musée de la Marine (C), a large collection of models and various wooden souvenirs of the navy, which illustrate the history of the port of Honfleur.

B&R’s Normandy Biking trip is like turning the pages of a history book while riding along white sand beaches, past quaint thatched cottages and ancient churches. Explore a region as unique as it is historic.

The creation of the “Vieux Bassin” harbour was initiated by Louis XIV’s minister Colbert. The rich and stately houses on the Quai St-Etienne were not as popular among painters and artists flocking to the town as the high and narrow dwellings on the opposite Quai Ste-Catherine. At the entrance of the basin one finds La Lieutenance (D), the 17th century residence of the lieutenant du roi, or governor of Honfleur. Make your way around the harbour to La Lieutenance. The Rue de Logettes leads from La Lieutenance (and the former city gate Porte de Caen attached to it) to the Place Ste-Catherine, named after the interesting church in its centre. This quarter was only attached to the Quartier de L’Enclos in the 19th century by filling in the old moats. It is a lovely area with lots of shops. 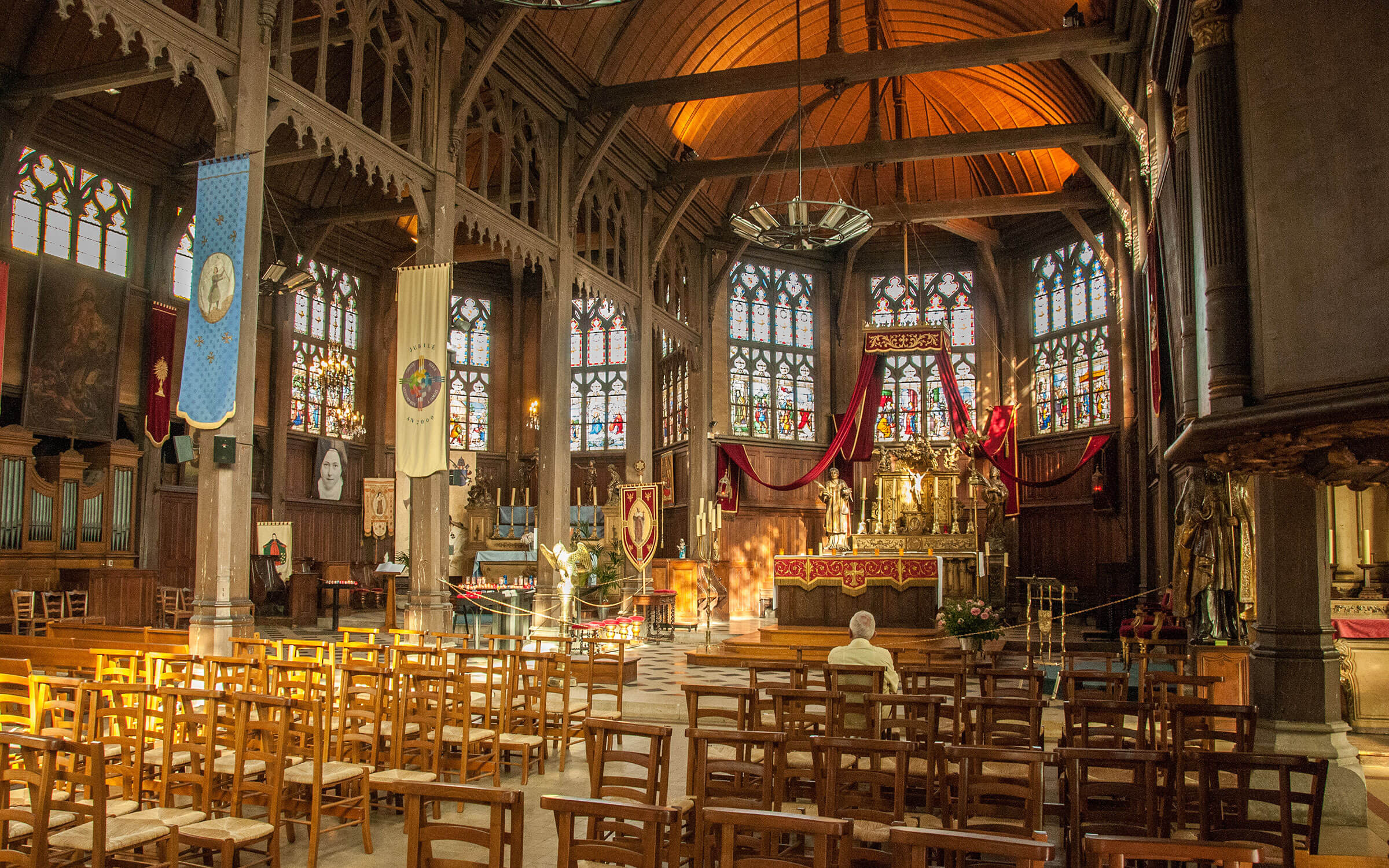 The Ste-Catherine (E) church, pictured above, was built following the Hundred Years’ War. The residents of Honfleur wanted to immediately honour God for making the English leave and decided not to wait until masons and other craftsmen became available to build their church. They built it themselves using local shipwrights and shipbuilding techniques, as can be seen in the wooden vaulting. The vaulting of the principal nave resembles an inverted ship’s hull. The second nave has lovely polychrome sculptures. Notice the bell tower springing from the operators’ housing next to the church. Walk past the tower into the Rue des Lingots and then left onto the Rue de L’Homme de Bois. Continue until you see Musée Municipal Eugène Boudin (F) on your left. Built in 1974 to honour the distinguished Honfleur-born pre-Impressionist, this museum displays his work as well as that of Jongkind, Dubourg, Monet and Dufy. (Unfortunately, Boudin’s best work is in the United States.) The museum also has an impressive display of traditional costumes, hats and lace.