What to Know About Provençal Cuisine

It is above all Mediterranean and “familial”—la cuisine de grand-mère. It isn’t restaurant cooking, la haute cuisine, for which France is justly famous. So the obvious question is: can this cooking be found in restaurants? The answer: Yes, if la grand-mère happens to be in the kitchen. 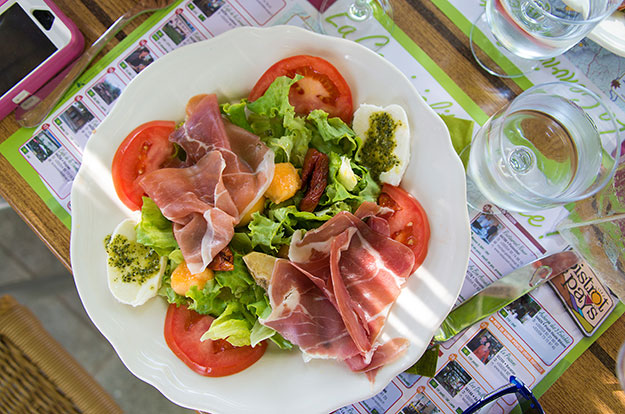 We don’t necessarily recommend demanding a kitchen tour to confirm the presence of a little old lady before booking restaurant reservations. But Reine Sammut at La Fènière in Lourmarin—one of the most creative yet traditional chefs in Provence—says she learned everything from her own grand-mère, who can still be found poking around the kitchen, her fingers in all the sauces.

Below is a list of some of the more traditional dishes—but don’t forget that most menus loyally respect the seasons. In early autumn, the first game and the wild mushrooms arrive. In January and February, truffles are in season, bringing their inimitable flavour to omelettes and pasta. Winter is also the season for the daubes—beef or lamb cooked slowly in a sauce of wine and vegetables. In April, asparagus appears, followed by broad beans, melons from Cavaillon and strawberries from Carpentras. Then come cherries in May and June, followed by peaches, nectarines, apricots, and eventually, figs, apples, pears and table grapes.

See (and Sip) for Yourself

On B&R’s Provence Luberon Biking trip, stray outside the region’s hotspots to see our favourite hidden gems and soak up authentic Provence. It’s a classic experience—with a twist.

The fabled glow that bathes Provence & the Cote d’Azur’s stunning coastline has entranced painters, poets and cyclists for centuries. Find out how we can design a custom trip that’s a work of art in and of itself.

Soupe au pistou is a bean and pasta soup (the Provençal version of minestrone) with a paste of fresh basil, garlic, Parmesan cheese and olive oil stirred into it at the moment of serving.

A vegetable stew made of eggplant (aubergine), zucchini (courgettes), onions, bell peppers and tomatoes, cooked in olive oil and flavoured with herbs and garlic. Not to be confused with the Disney film Ratatouille, made of computer pixels and the voice of Patton Oswalt, watched with children and flavoured with jokes for parents.

The word refers both to a meal, the aïoli, and to the mayonnaise sauce made with crushed garlic and olive oil that is always served with it. The basis of an aïoli is salt cod, boiled potatoes and carrots. Traditionally, this meal was eaten on Friday and many leftovers from the week might be added—hard-boiled eggs, beetroot, cauliflower, chickpeas and green beans.

Olives and capers crushed into a paste, mixed with olive oil and lemon juice and then strongly spiced. Often served on toast as an apéritif.

This is probably Provence’s most famous dish, and also the hardest to find (except in Marseille). It is a cross between a soup and a stew and is made from three essential fishes—scorpionfish (rascasse), gurnet (groudin) and eel (congre)—as well as any of a number of others, including monkfish, John Dory, weaver fish, whiting, bass, sea perch, mussels, prawns, crabs and crayfish. The dish is seasoned with olive oil, saffron, garlic, leeks, onions, tomatoes and herbs, and is served in two parts—the soup is served on slices of toast or French bread with rouille, while the fish is served on a separate dish. Remember: a good bouillabaisse should be freshly prepared from the finest ingredients, it should be eaten at lunchtime in close proximity to the sea with a great bottle of rosé (yes, this exists), and no more than 30 minutes after lavishly tipping the waiter one should partake in that other indispensable Provençal tradition: the siesta.

Small sand crustaceans from the Camargue, usually steamed and served with a garlic sauce.

A salad of cooked vegetables such as beans and potatoes, mixed with raw vegetables such as green peppers, tomatoes and corn. Garnished with quartered hard-boiled eggs, anchovies and tuna, all on a bed of lettuce with an oil, vinegar and garlic dressing.

Artichokes fried and simmered, often with bacon and garlic.