Of Wine and Wheels

Exactly how many wine regions exist in Europe? Does Burgundy count as one, or many (Chablis, Cote d’Or, Beaujolais, etc.)? Do dessert wine regions, like Marsala or Sherry, count?

While the questions abound, one thing is for certain: regardless of how you define them, Old World wine regions offer some of the best recreational biking on the planet; vines tend to thrive in scenic and hilly (but not mountainous) countryside, wine towns tend to be small, unindustrial (no heavy truck traffic) and cultured, and where there is good wine, it’s generally a safe bet you’ll find good food.

So when choosing a wine-inspired trek that’s right for you, the choices are as tough as they are many. Herewith, a (very) brief primer on a few of my favourites.

The Mosel, Alsace and Champagne 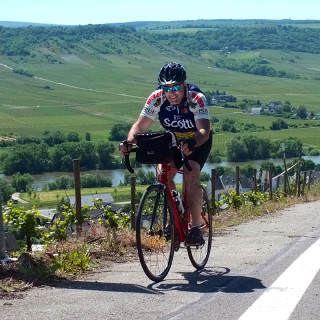 The Mosel Valley offers dramatic landscapes: stunning, steep hillsides blanketed with vineyards, yet with most of the biking kept flat along the riverbanks. In Alsace, the terrain tempers to nearly flat in places, with the peaks of the Vosges and the mighty Rhine as parentheses. And in Champagne, gently rolling roads traverse rows of Chardonnay, punctuated by the occasional sleepy village that just happens to have a great bistro in its midst. Overall, the mix of wine profiles (under-the-radar Mosel, recognizable Alsace, and prestigious Champagne) makes for a perfect trip recipe. Or blend, if you will. 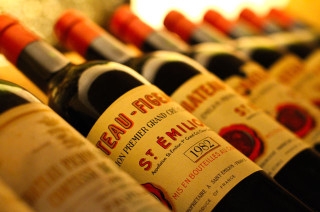 On a trip that spans northern Spain and southwest France, Ribera del Duero plays the role of sleeper, an under-appreciated appellation modelled on Bordeaux but cultivated deep in the heart of Spain, along the flanks of the upper Duero River. (Downstream, in Portugal, it becomes the Douro, where the viticultural bounty takes the form of sweet port wine.) The riding is gentle and pretty, the feel traditional. In Rioja, another Bordeaux protégé, the varietal is tempranillo and the vintages more familiar to North Americans; here, the terrain undulates more noticeably on either side of the Ebro River, and the cuisine and architecture take a sharp turn toward cutting-edge. The prestige region is Bordeaux, where the grand estates dot a landscape that can vary from the dead-flat Medoc to the rolling hills of St-Emilion/Pomerol, and household names – Rothschild, Margaux, Petrus – reveal themselves around each turn.

The pattern changes in Italy, where every appellation constitutes an A-lister and each hill a challenge, though fortunately one both relentless and relentlessly beautiful. Barolo is the royal wine of the Savoy of Piemonte, born of the Nebbiolo grape whose etymological root “fog” honours the mist that often shrouds its vineyards; when the mist lifts midday, it reveals stunning vistas replete with the village or forest-topped hills.

In Tuscany, the light is decidedly Mediterranean, its intensity illuminating the now-iconic images that have come to stand for all Italy: terracotta-roofed walled towns, groves of silvery olive trees, lines of cypresses guarding sentry-like the approach to an ochre villa. Wine-wise the region offers a self-contained spectrum, with those at the high-quality end distinct in both flavour and provenance: Brunello from the rugged lands southeast of Siena; Chianti Classico from the sere inland; and Super Tuscans like Sassicaia and Ornellaia prospering in the hot sun, tempered by sea breezes in the Maremma, along the Tyrrhenian coast.

Part of B&R since the days of student biking, Chris completed the grueling one-day ride from Paris to London in 1989. Less crazy after all these years, Chris now limits his single-day rides to a daily commute to our office, where he oversees the planning of all our trips in Italy and Central & Eastern Europe.
View or Add Comments