Exploring Atlantic France With the Family

In 1983, I was a young little French guy and summer time meant something to me.

These were the glorious days of my childhood, when I enjoyed my family’s journeys, whose only goal was discovering other parts of France. I clearly remember my father saying during a cold winter dinner that next year’s vacation would be on both Ile d’Oléron and Ile de Ré. My brother and I looked at each other, wondering what were these two mysterious islands that we had never even heard of. We decided to stay positive and to look forward to next July…

A few months later, after waiting patiently for months and taking a chaotic drive from my native vineyards of Burgundy all the way to the Atlantic Coast of France, my brother and I were ready to know. After settling down in the villa my parents rented in St Martin de Ré, we were both armed with our beach toys and ran to the closest dunes. Arriving almost out of breath on top of the first one, what a surprise awaited us… there was no water. The ocean was a good mile away from the beach! We couldn’t believe it! We’ve never heard about “tide” before…

It was at this exact moment that my brother and I developed our passion for the Charentes Maritimes region and its jewels Oléron and Ré. During those four weeks, we learned all about the culture of the oysters and the history of the pirates. We watched every morning as the small fishing boats floated away, and we biked along those bike paths (flat enough that our little legs could fly!), wandering the countryside amongst natural bird reserves and immaculate beaches. Our parents taught us how to enjoy such a treasure of emotion, mingling with locals and eating grilled fish directly from local markets.

Like my parents, B&R has always tried to introduce people to places that nobody had ever heard about before. So, a year ago when George and Norm asked where to go next, my answer was: “Of course, the islands of Ré and Oléron!”

I no longer have my beach toys, but after some deep digging in the region, I’ve been able to (almost) re-create the exhilarating experience of my childhood. Just remember: the dunes are a little further from the water than they look. 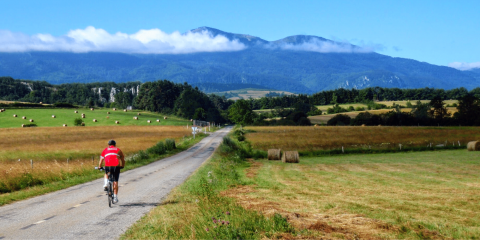 Cycling the Tour de France Route in the French Alps