Insider’s Guide:
A Few of Our Favourite Things to do in Patagonia

Long known as a land of adventure, Patagonia boasts an embarrassment of natural, historical and cultural riches.

From the peaks of some of the world’s most impressive (and hardest to climb) mountains to the depths of the breathtaking lakes and rivers below, here are just a few of our favourite things to do in Patagonia that prove the end of the earth is just the beginning.

Things to Do in Patagonia

(Where Adventure Goes to Get Away From it All)

Situated within Los Glaciares National Park in southwest Santa Cruz Province, Argentina, this glacier is certainly one of the most significant tourist attractions in Patagonia.

At a balking 30 km (19 mi) in length and rising an average height of 240 feet above the water, this is the world’s third largest reserve of fresh water and a declared natural beauty, solidified by its designation as a UNESCO World Heritage Site in 1981.

While the glacier is popular for trekking and tends to be the main draw, the National Park, home to some incredible biodiversity, should not be overlooked – think mountains, lakes and woods, with the arid Patagonia steppe to the east.

Another important park is the Torres del Paine National Park, which finds itself in Chilean territory while bordering Los Glaciares National Park to the north, in Argentine territory. Similar to Los Glaciares, this park heavily features mountains, glaciers, lakes and rivers. 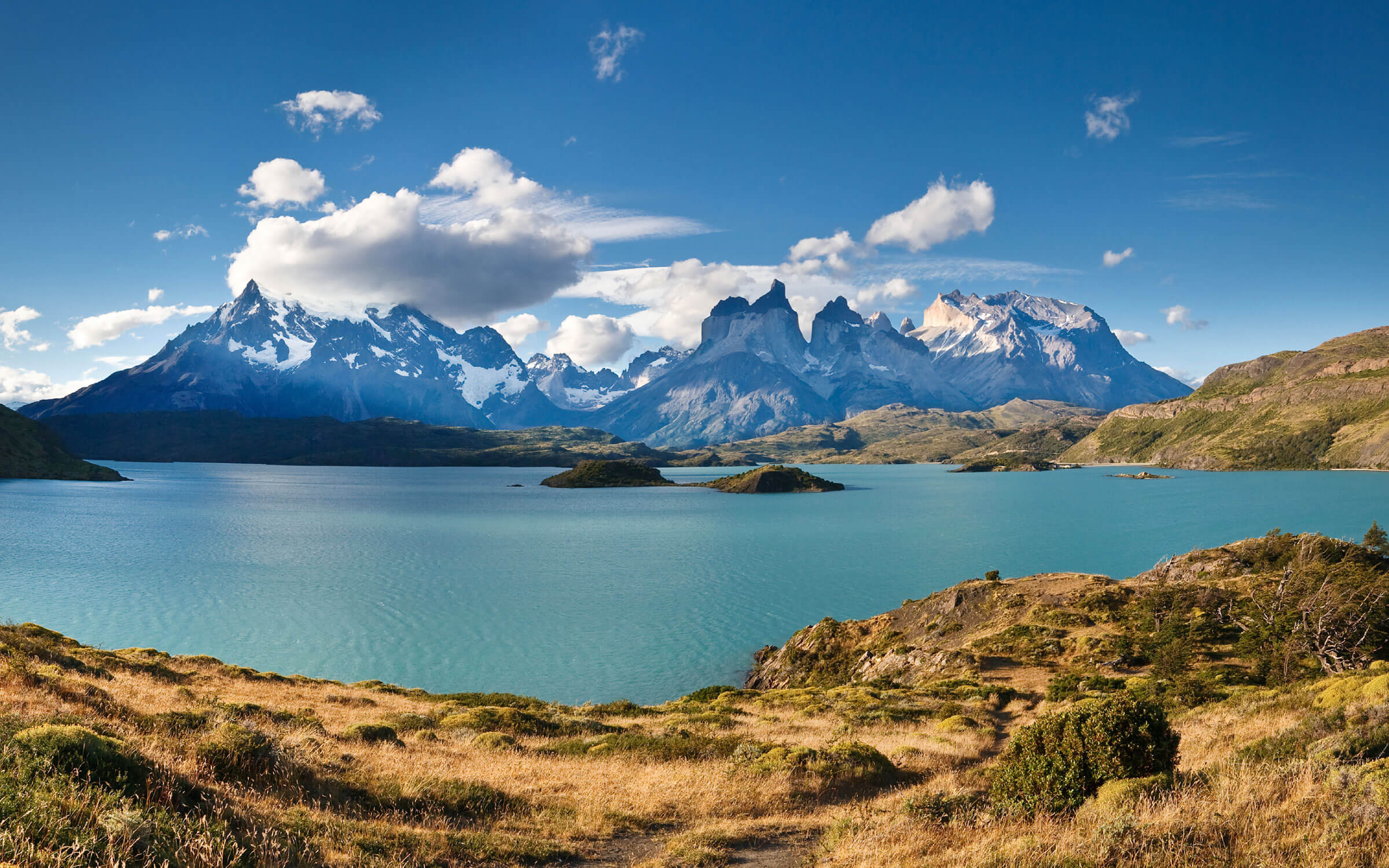 The Torres del Paine are the three granite peaks that surge triumphantly from the Paine mountain range, or Paine Massif.

These pillars dominate the landscape and are often considered the main draw, but, again, once you are in the park there are numerous other attractions with arresting power. A variety of trails can take you through splendid forests, from open steppes to rugged mountains, across rushing rivers and towards the seemingly endless blue of the glacier.

This important archipelago found off the southernmost tip of the South American mainland consists of a main island, Isla Grande de Tierra del Fuego, and a series of many smaller islands. Like so much of Patagonia, Tierra del Fuego is split between Argentina and Chile.

Tierra del Fuego, literally meaning “Land of Fire,” was a name provided by Spanish explorers who were journeying in search of the Spice Isles. Passing by the shorelines of what would become Tierra del Fuego, they saw the land dotted with man-made fires, and provided it with an apt (if a little on-the-nose) name.

Of course, indigenous communities had been living on the island long before it was “discovered” by the Spanish.

By all accounts it is clear that these communities must have been incredibly hearty to survive in such harsh climates. In fact, they were fierce warriors who, if necessary, applied greasy fish or animal fat to their bodies to protect themselves from the wind and cold.

Unfortunately, if you travel to Argentina today you will not see any trace of the indigenous communities that inhabited this area. While they were strong and persevered through much, the influx of foreign disease and culture proved too great a burden.

Discovery of natural resources brought the Spanish and then other European settlers who arrived with the goal of “civilizing” the local people. It didn’t take long before the distinctive cultures of these indigenous groups faded.

This intimidating mountain can be found near El Chaltén village, located in the southern Patagonian ice field in Patagonia.

While it was first climbed back in 1952, it remains one of the most technically challenging mountains in the world. Though it certainly isn’t the highest in the world, it does boast sheer granite faces that present long and challenging climbing. As well, weather in the area can be especially inclement. 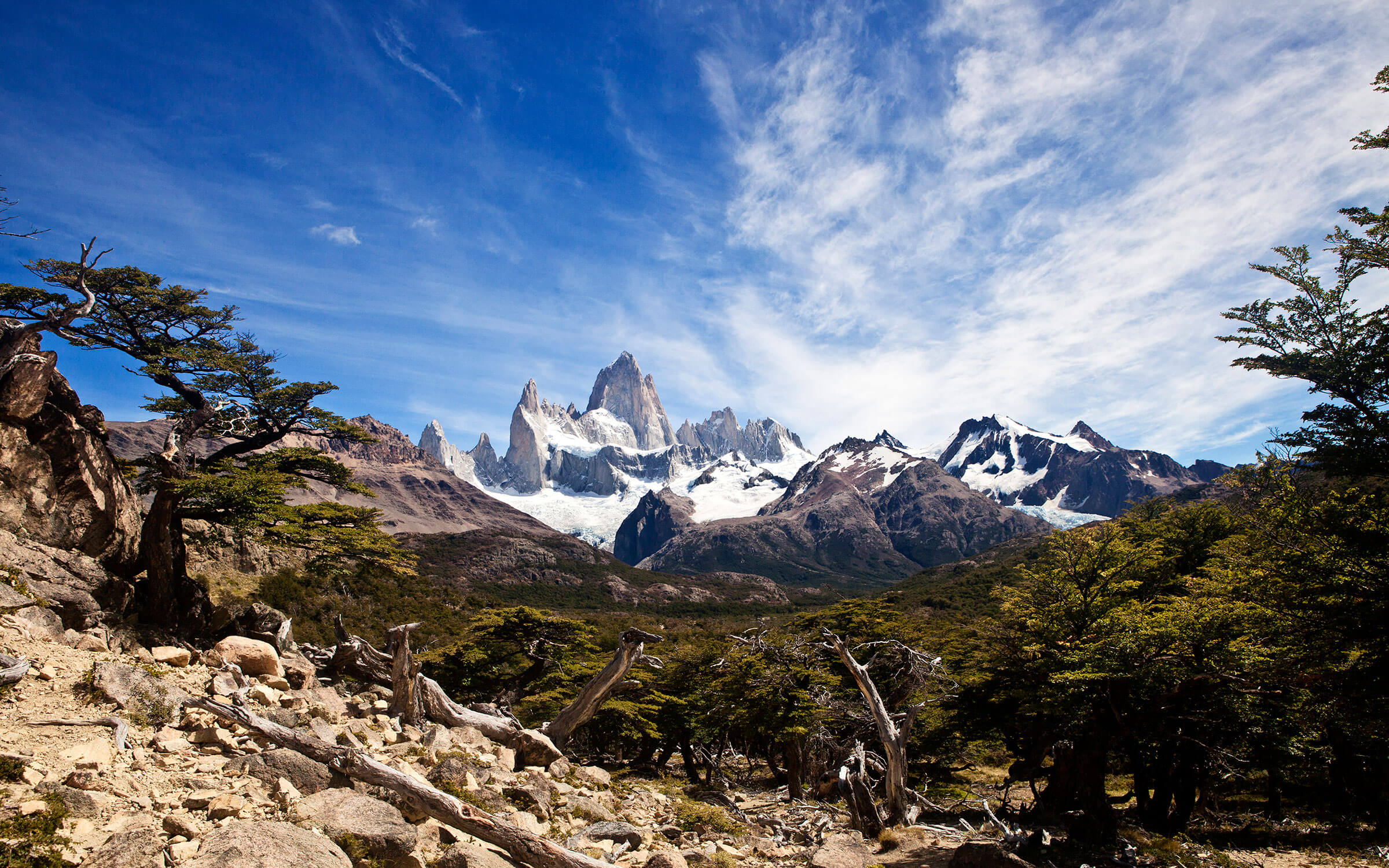 The mountain’s name was bestowed by the Argentine explorer Francisco Moreno, who wanted to honour Robert Fitz Roy, captain of the HMS Beagle and the man responsible for chartering parts of the Patagonia coast.

The Emblem of Patagonia

You may also recognize the name, or the image of the mountain, from the successful outdoor clothing company Patagonia.

The logo for the eponymous clothing company is the skyline of Monte Fitz Roy, likely inspired after Yvon Chouinard and his friend Doug Tompkins took a trip down to Patagonia in the 1960s and successfully reached the summit of Fitz Roy.