I often tell my travellers when they’re headed to Peru not to skip town when they’re finished, as many other parts of the country are just as fascinating as its most popular attraction, Machu Picchu. Discover a new and unexpected side of Peru! Two lesser-known regions are favourites of mine to explore in depth, including Arequipa, the colonial town south of Cusco, and the unspoiled nature and hikes in the Colca Canyon. Here’s a look at some of the riches that these diverse, sophisticated and surprising regions of Peru hold.

The colonial capital of the country (which was then replaced by Lima after Peru secured independence), Peru’s second-largest city is also quite the melting pot, as it was once a main hub of trade between Cusco (to the north), Puno and Lake Titicaca to the east, the western coastline, and the neighbouring countries of Bolivia and Chile.

One of the city’s most remarkable sights are three active volcanoes which frame its skyline. From time to time you can see these volcanoes expelling ash far off in the distance. It’s a stunning landscape, with vast, lush agricultural vistas contrasting with the towering volcanoes and bright blue skies above.

Arequipa’s unique architecture, known as Escuela Arequipeña, blends the characteristics of colonial, republican and indigenous styles, and can especially be seen in the historic city centre, also a UNESCO World Heritage Site. Known as the ‘white city’, many of the buildings here are built out of local sillar stone, cut from white compounded volcanic ash.

The story of Juanita the mummy is truly fascinating: Following a volcanic eruption, this 15thC Incan girl was discovered in 1995 by climbers on the top of Mount Ampato. Her body was preserved completely intact after years of being frozen. Those who have studied Juanita believe was she was part of a ritual sacrifice to appease the Incan gods. You can view Juanita and learn more about her life at the Museo Santuarios Andinos. (It’s said that since her unearthing, some strange, and mysterious situations have occurred, and so some locals would like her to be returned to the mountain).

It might sound lacklustre to visit a monastery, but I assure you, it’s worth it for the photos. This colourful convent is painted in the most brilliant hues—rich coral and deep azure, contrasted against the white sillar stone paths. From the scandalous history of the nuns to the absolutely stunning 20,000-square-foot complex itself, you won’t regret visiting.

First built in 1579 by a wealthy widow, Maria de Guzman, the convent was established for wealthy families as a place to send their second-born daughters to spend their lives in the church, paying hefty fees and dowries to the convent, which had servants and staff to cater to the nuns. In its heyday, the monastery was more of a lavish social club where the nuns would host parties. There are rumours that the monastery even had an underground tunnel connected to a church nearby which happened to house monks. Many believe this was the reason that some nuns found themselves ‘inexplicably’ pregnant. When the Pope at the time caught wind of these rumours, he sent Sister Josefa Cardena to take over control of the monastery. Upon her coming into power at the monastery the party was over: she freed the servants and slaves, put the nuns to work, and sent the richest dowries back to Spain!

The monastery still functions today with about 20 nuns remaining onsite, but you will not see them, as they are cloistered from the rest of the world. Following damage from two earthquakes in the 1960s, the remaining nuns decided to open the monastery to the public to help maintain its costs.

Those who love to discover new flavours will also find the culinary scene in Arequipa to be one of Peru’s best. Arequipa was a city visited by many travelling to and from the Colca Valley Lake Titicaca, and onwards to Bolivia and northern Chile. It was well-positioned to receive the yields from Cusco and the Sacred Valley that were to be sold to neighbouring countries.

As the city is situated between these diverse areas, the food influences are unique and delicious, having developed over hundreds of years in small restaurants called picanterias. These picanterias have created their very own Arequipa flavour, a mouthwatering mixture of cultures, flavours, ingredients and spices. The traditional time to visit is for lunch, and some must-tries include rocoto relleno (stuffed peppers), chupe de camarones (a type of shrimp soup) and chicha morada (a drink made from purple corn).

Casa Andina, a modern hotel in a great location just by the Santa Catalina Monastery, and a 15-minute walk from the main square, Plaza de Armas.

Discover a different Peru on our Arequipa & Colca Canyon Active Expedition. Journey through the colonial and white stone city of Arequipa before going low and slow with hikes and rambles in the depths of the Colca Canyon. 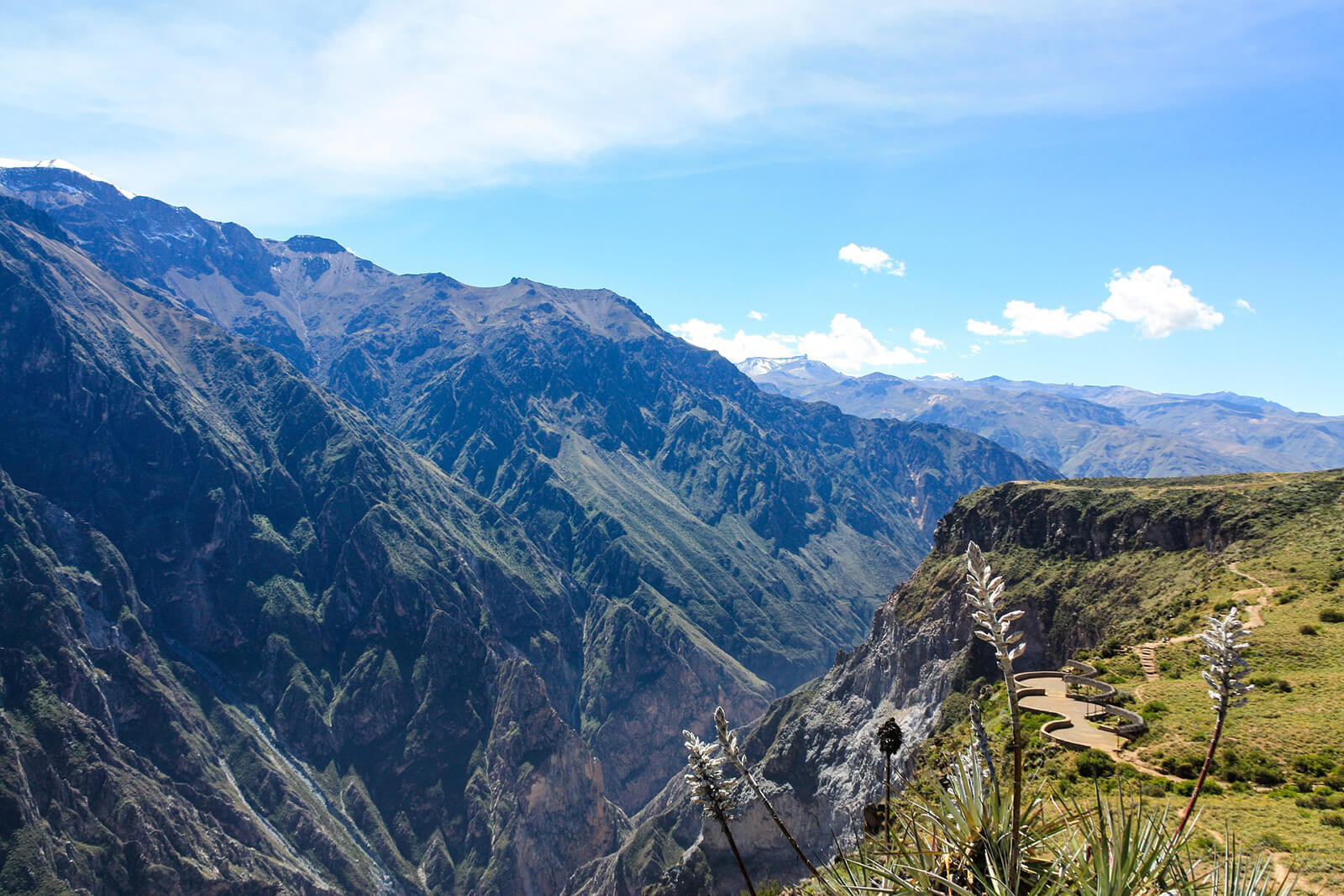 Go Low in the Colca Canyon

Don’t fear the depths of the Colca Canyon, located in the south of the country. In some places, it’s deeper than the Grand Canyon itself, and is recognized as one of the deepest canyons in the world, as low as 3,270 feet (10,730 feet). This typical Andean valley is saturated with hundreds of Inca terraces in an array of colours—lush and green in the summer, gold in the drier months—and rooted in pre-Inca times.

The first people to inhabit the region were the Quechua-speaking Cabana, descendants from the Wari, and the Collagua cultures, who relocated here from Lake Titicaca. It was only in the year 1320 that the Inca civilization came to this area, and through intermarrying, the Inca established their dominance over the region. Spanish conquerors under the direction of Gonzalo Pizarro arrived in 1540 and relocating the locals to centrally-built pueblo settlements, which remain today as the main towns in the region.

Your best bet to make the most of the Colca Canyon is heading out by foot on picturesque hikes, with postcard-worthy views at every turn. A relaxed and tranquil atmosphere means your walk on the trails will be uncrowded, a major contrast to sites like Machu Picchu. Rafting on the Colca River and horseback riding are other activities to consider.

Don’t forget to look up—swarms of the magnificent Andean condor make their home along the Canyon amongst the rocks. This endangered bird is the largest flying land bird in the Western hemisphere with a maximum wingspan of up to 3.3 metres (just over 10 feet). Anywhere else in the world, a sighting is extremely rare, but not so here in the Colca Canyon; you will see flocks of them soaring and perhaps, if they fly close enough, you will feel the mighty wind from their wings. Also keep an eye out for the giant hummingbird, about 21 centimetres (8.5 inches) in length, and the bird that inspired the hummingbird art of the Nazca Lines.

Hotel Belmond Las Casitas is a serene and tranquil getaway in the Colca Valley with just 20 private casitas. It is set amongst the backdrop of the Andes Mountains and features an on-site spa, vegetable garden, greenhouses, and even a small farm with horses, pigs, alpacas and guinea pigs, great if you are travelling with the family.