In Deep: An Introduction to Mallorca

Situated within the occidental part of the Mediterranean, the Spanish island of Mallorca has tempted many foreign invaders through the years—and understandably so.

To this day foreigners can’t help but feel drawn to the island (I mean, just look at it!), albeit for reasons that involve more pleasure than plunder.

Ever popular with the artistic crowd, Mallorca served as the location that Frédéric Chopin and lover George Sand spent their famous “winter of discontent” (1838-39). Luminaries ranging from Brad Pitt, Gwyneth Paltrow, Richard Branson, Pierce Brosnan, Michael Douglas and Catherine Zeta-Jones have made the trip.

Meanwhile, the Spanish royal family considers the island home, and much of Spain’s high society frequents it as a getaway. And the locals? For them, everything is cap problema (no problem).

Don’t tell locals they speak a dialect (trust me, they won’t appreciate it). Rather, they’ll proudly tell you that Catalan (and by default, Mallorquin) is a Romance language, just like French, Italian, Portuguese, Roman and Spanish. In fact, Catalan has been spoken since the 12th century and is presently the spoken language not only in Catalonia (including “French Catalonia,” just across the border in France) but also in Andorra, Aragon, Balearic Islands and Valencia. However, even though all the locals speak Catalan, one can get by well with Spanish, as practically every Mallorcan is bilingual.

There are variations between the language the locals of Mallorca speak and that of their counterparts in Catalonia. This is partly due to the fact that the language is less obsessively guarded here against the introduction of Spanish words into the lexicon.

Since 1714, the use of Catalan has been banned on several occasions. Despite the cultural and political repression, the distinct Catalan identity has never been fully obliterated; if anything these bans have caused the emergence of Catalan’s nationalism. After Francisco Franco’s death in 1975, the Catalan government started to actively promote the use of the Catalan language. The Generalitat (regional government) aimed to have all Catalonia’s children taught primarily in Catalan and has recently adopted a new linguistic policy to dub 25% of films into Catalan. Similar quotas have also been set for Catalan music on radio airtime.

This is one of Mallorca’s quintessential towns. The main landmark is El Calvario, the Calvary Steps, a stairway lined with cypress trees that dates back to the Templar Knights and leads through the Stations of the Cross up to a hilltop oratory from the 13th century.

With a large population of locals (read: less tourists), Pollensa has kept much of the island’s history alive. Celebrated events include the legendary fight between the Turkish invaders and the Christians in 1550, when the Christians saved the town from the Turkish invasion; and the Easter celebration when Jesus is taken down from the cross after being crucified in El Calvario. The main church, Nuestra Senora de los Angeles, has a beautiful barrel vault and a Baroque altarpiece, and there’s a food and crafts market every Sunday.

The village Deiá is probably one of the most photographed spots on the island. Thanks to its location just underneath the Puig des Teix (one of the most jagged mountains on the Tramuntana range), it has a rugged beauty. Deiá has a reputation as the preferred place for many artists; this may be due in part to British writer Robert Graves who found inspiration here and composed his famous I Claudius in the village. 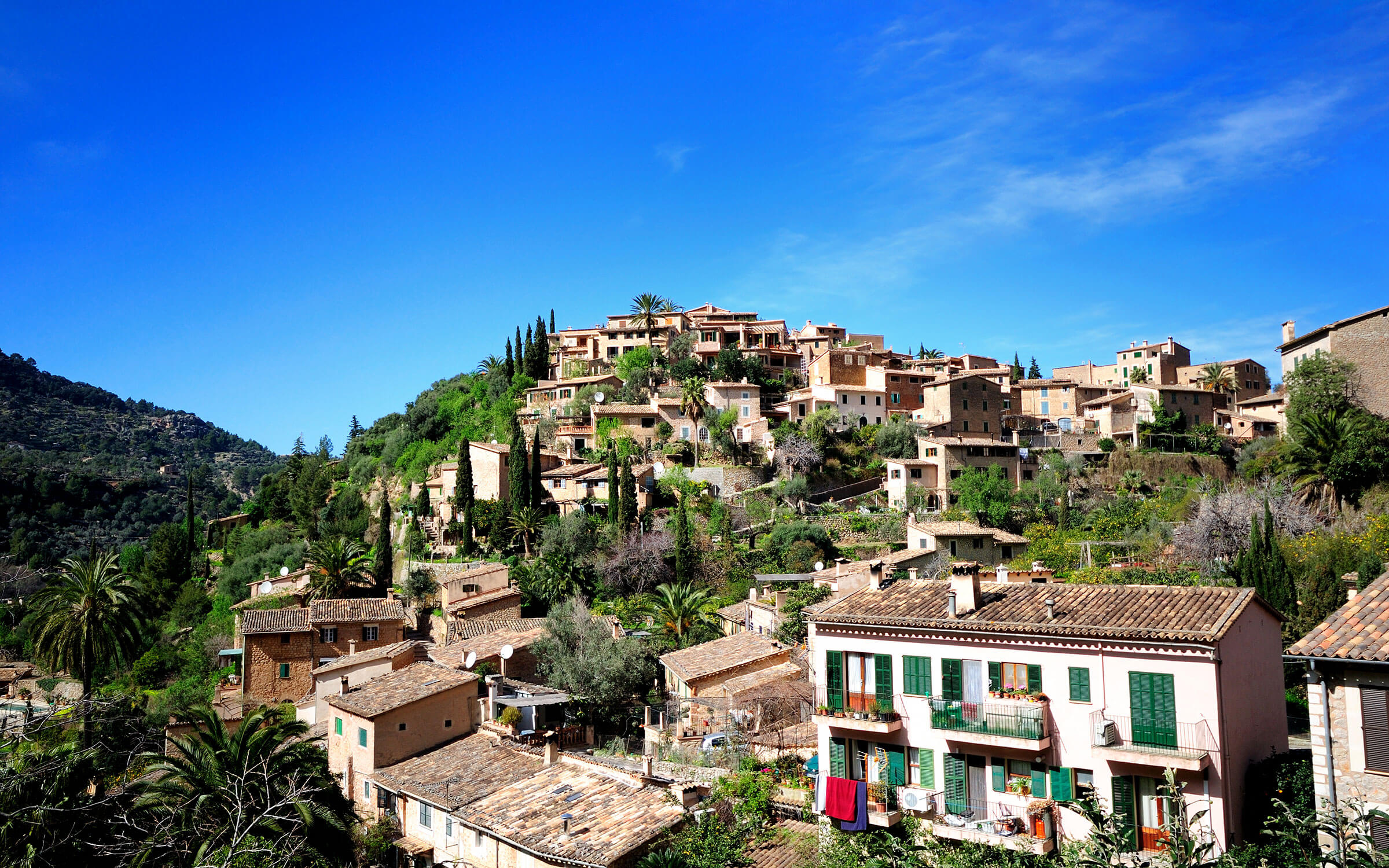 Since then this coastal town has found itself host to many artists. Perched atop a small hill, the church of Saint Joan protects the cemetery and the modest museum of religious objects; It is also a great spot to take in the views. The archaeological museum, founded by American William Waldren in 1962, contains a thorough chronology of Balearic prehistory, including information on the settlements around Deiá—Valldemosa and Sóller. Our favourite time to stroll the town is after 7 p.m. when the light is best and most day visitors have left.

The clear waters of Cala Deia are incredibly inviting, making it a popular tourist spot on the island. Take notice of the small dry docks used to launch boats into the sea, as well as the pretty summerhouses and fishing huts.

Mallorca is the home of the most famous man-made pearls. Created using a combination of natural and synthetic methods, the pearls are cultivated artificially by introducing a small particle in a farm-grown oyster. The longer the particle is left inside, the bigger the pearl. People from all over the world buy Mallorcan jewelry, awaiting the arrival of the new collections every year.

Lluc is the religious centre of the island. The Mallorcan patron, The Moreneta Virgin of Mare de Deu, who resides in the church, has been venerated since the 13th century when an Arab shepherd boy discovered a dark wooden statue of the virgin in the cleft of a rock. As you might imagine, this discovery led to numerous pilgrimages to Lluc from many parts of the island. The sanctuary of the virgin was turned into a parish in the 15th century.

With winding roads that lead to a dramatic promontory with sea-sculpted cliffs nearly 400 feet high, this cape is one of the most spectacular places on the island. Declared a Special Area of Natural Interest (ANEI) by the Spanish government for its rugged and wild beauty, the most impressive of its secluded coves and beaches are Cala Murta, Cala Gossalba and Cala Figuera. The Mallorcan poet Miguel Costa i Llobera dedicated one of his well-known poems to the cape. Not to be outdone by the natural scenery, the classic Hotel Formentor, built in 1929, has hosted legends such as Winston Churchill, John Wayne and Peter Ustinov.

An emblematic mountain that shelters the town of Pollensa, this is another designated ANEI area. The Sanctuary of the Mare de Deu des Puig (as it is known more formally) dates back to the 14th century and today it exists as a converted B&B with great views of the valley and Pollensa Bay.

The Romans settled the town of Alcúdia in 123 B.C., calling it Pollentia. Today, you can still see Roman remains such as the solariums, old walls, and a smattering of houses (and a theatre!) that dot the town. Enclosing the old town are the medieval walls that existed in the Middle Ages, accessed through the San Sebastiá and Xara entrances.

This beach is one of the hidden gems on the island. Imagine a cove where just behind the sand there is a wall of stone that makes the beach totally private and incredibly beautiful. This little beach is only reachable by foot or by boat. A dip in the blue Med is more than recommended here—it’s mandatory.

One of the most memorable walking routes in Mallorca, this olive and almond-tree-lined canyon features a stone-cut stairway, through which the Biniaraix stream winds. A former pilgrimage trail that leads from Sóller to Lluc, now masterfully restored, this path hugs steep hillsides, also tracing stalactites and stalagmites further down the valley. Aside from the breathtaking views of the canyon, it is worth admiring the beautiful rocks scattered in the bed of the brook, smoothed by years of cascading water.

Sóller and its valley of the same name comprise another important and beautiful rural town. With an amphitheatre of mountains surrounding the town, the valley is mainly used for growing oranges, lemons and the occasional olive grove. Holding dominion in the centre of the town in the Plaza de la Constitution is the Church of Saint Bartomeu, built between 1688 and 1811. The baroque outline of the church is complemented by a modernist façade made by a disciple of Antoni Gaudí, Joan Rubió, in the early 20th century. The two towers of the façade are familiar reminders of the famous Sagrada Familia in Barcelona. Next to the church is the equally impressive bank built in 1911 with the same modernist touches in order to blend with the façade of the church; the same architect’s hand is clearly at play.