Well known for one of Europe’s most pristine urban beaches and an almost embarrassing number of Michelin-starred restaurants (more on both of which below), San Sebastian—or Denostia, as it’s known in the Basque language—boasts enough incredible experiences to warrant a few days’ stay.

Below, we’ve rounded up a few of our favourite ways to submerse yourself in one of Spain’s most incredible (and most delicious) cities.

9 Awesome Things
To Do in San Sebastian

Pig Out on Pintxos

San Sebastian famously boasts more Michelin-starred restaurants than any other city on earth, but its real claim to foodie fame extends well beyond Michelin’s posh confines.

You’ll find two things in nearly every bar in San Sebastian: pintxos, the Basque country’s delicious version of tapas, and Sagardoa, the region’s signature cider, which bartenders exclusively pour from a height of two feet or more above the glass—so beware of a Sagardoa splash!

Great pintxos spots are too numerous to name, and not hard to find. Simply stroll through the Old Town (on which more below) and you won’t be able to go a block without finding one.

A few that pop up on various lists of the city’s best include Bar Borda Berri, Bar Nestor, La Cuchara de San Telmo (where the pintxos isn’t on display but you can order from a menu) and La Viña, where you can also sample the famous cheesecake they make fresh everyday.

After an evening spent indulging in pintxos and sagardoa, you may find yourself unable to do much more than lie on the beach. Fortunately, you won’t need to go far.

One of the best urban beaches in Europe (and maybe the whole world), Playa de la Concha and the city’s western beach, Playa de Ondarreta, offer a chance to soak up the turquoise waters of the Bay of La Concha without needing to take a car out of town.

Bring a beach towel or rent a chair from any of the on-beach vendors, enjoy a dip in the crystalline waters, then head up to the boardwalk when you’re ready for lunch and some people watching.

Perched between Mounts Urgull and Igueldo, Santa Clara is a tiny island that offers stunning views of San Sebastian’s shore.

Most famous for the (long unmanned) lighthouse perched at its peak, the island has a small beach that only appears during low tide. As in the rest of San Sebastian, food and drink are never far from reach. Enjoy a snack and a glass of wine at Chiringuito de la isla Santa Clara, and drink in the views of Donostia in all her glory.

Lying at the foot of Mount Urgull and bordered by two bodies of water, the sea and the River Urumea, the Old Town is the beating heart of San Sebastian.

As mentioned, the streets are packed with pintxo bars and bustling with energy, and dotted with landmarks like the Basilicata of St. Mary of the Chorus, St. Vincent’s Church and the Plaza de la Constitucion.

While there’s plenty to see during the day, at night is when the Old Town really comes alive. Head out around 8 pm and begin bar hopping from one pintxos bar to the next for a quintessential San Sebastian experience.

Built between 1882 and 1887, the building that now serves as San Sebastian’s city hall might just occupy the best piece of real estate in the entire city. Originally the home of the Gran Casino until gambling was outlawed in 1924, politicians, writers, artists and many others gambled the nights away during the Belle Epoque era.

In 1937, the building quite literally found itself in the middle of the Spanish Civil War, and bullet holes from the conflict can still be seen to this day.

The city council moved in a decade later, in 1947, and the building has served as the city’s civic headquarters ever since. 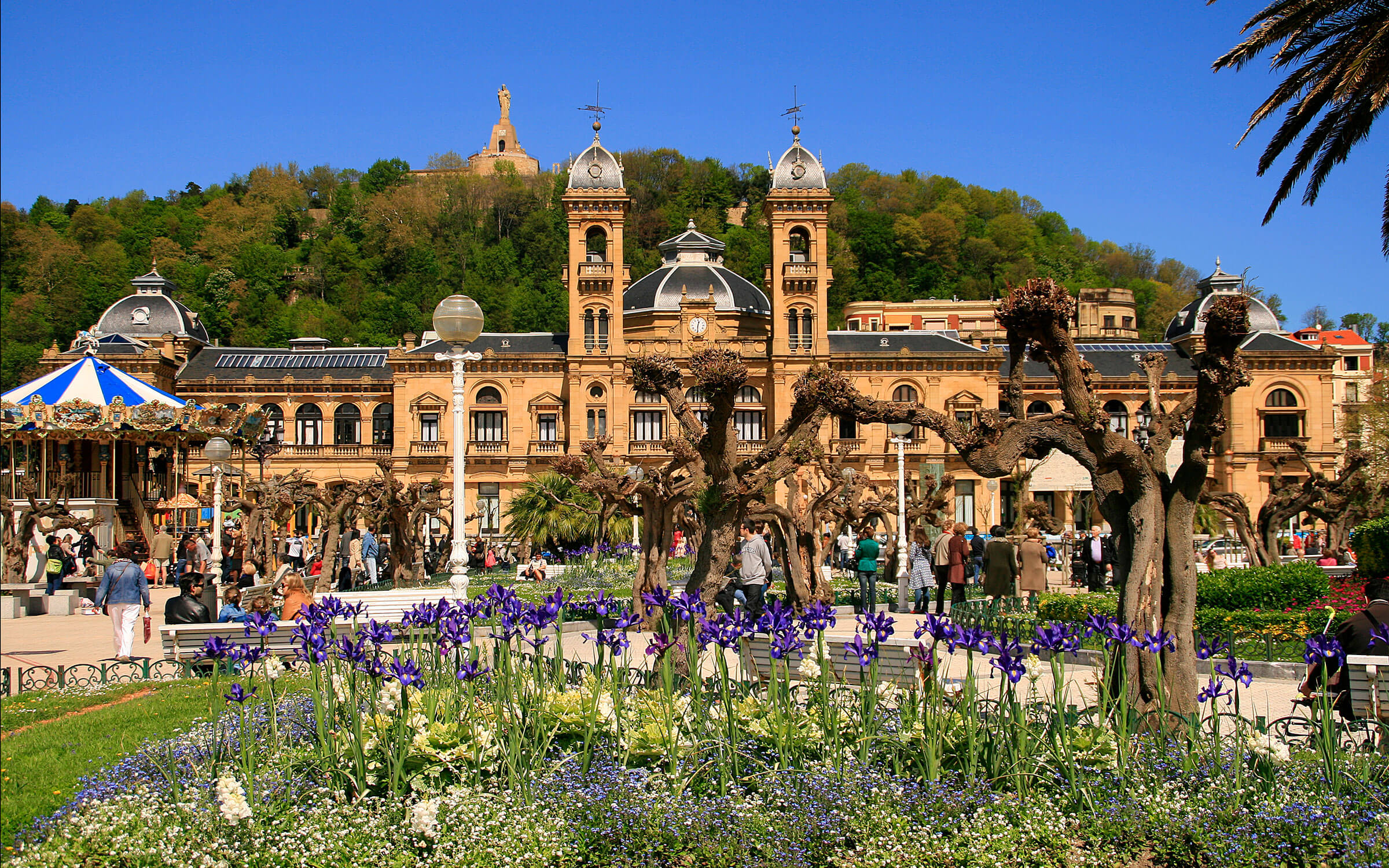 Partially housed in a 16thC Dominican convent in the heart of Old Town, San Telmo Museoa, or STM is dedicated to all things Basque.

Boasting more than 26,000 historic Basque artifacts, this is the best place in the world to learn about the rich heritage of Basque culture. In addition to its many treasures, the building itself is worth exploring for its mixture of architectural styles; Gothic, renaissance and contemporary designs are all incorporated into the building, making it a must-see.

Soak up the (Beachside) Spa

There are admittedly more luxurious spas in San Sebastian, but none quite as interesting as La Perla, located on La Concha beach (and when I say on the beach, I mean that literally).

La Perla offers thalassotherapy, which uses seawater as a form of therapy. Various salt water pools filled with water pumped in directly from the bay offer various forms of water therapy, primarily through the use of high-powered jets that target specific muscle groups.

While the water therapy can be incredibly soothing, the real benefit of La Perla is the beachside views offered by the panoramic jacuzzi. Relax in the water or on a nearby heated lounger and bliss out as you take in views of the beach and the bay.

If a rainy day keeps you from exploring as much as you’d like, La Perla offers the perfect in-door alternative.

Admire the Views from Monte Igueldo

Described as the limit between the city and the sea, Monte Igueldo sits at the western edge of La Concha Bay and offers some of the very best views of the city.

A 1912 funicular railway brings you to the top of the mountain, where you can take in views of the entire city, as well as the Gipuzkoan coastline and the sprawling Cantabrian Sea.  The mountain’s summit also boasts an amusement park and the 16thC El Torreón tower, on top of which you can get the best views of the city.

Perched on the corner of Mayor and Trinidad streets, construction on the “modern” part of Basilica de Santa Maria del Coro, designed by Pedro Ignacio de Lizardi, began in 1743.

I say “modern” because the church actually predates Lizardi’s 275-years-old building. Originally built by the Kings of Navarra in the 12th and 13th centuries, the previous structure was enlarged in the mid-16th century in the Gothic and Rennaisance styles by the Asturians. In 1668 a cache of gun powder being stored in the building accidentally exploded, severely damaging the previous church and necessitating Lizardi’s redesign.

The church’s rich history, combined with Lizardi’s remarkable design and classical style, makes it one of the oldest and most storied in San Sebastian.