Insider's Guide:
7 Things to Do in Barcelona

A quirky and sophisticated city with near-limitless options for cultural immersion, Barcelona is easy to explore on foot, and almost all of its most celebrated monuments are within walking distance of each another. In this first of my three-part Insider’s Guide, here just a few suggestions for things to do in Barcelona.

My Favourite Things To Do in Barcelona

Plaça Reial
This is a lively square full of cafés and surrounded by neo-classical buildings. Next to the fountain in the middle of the square are lampposts designed by Gaudí. On Sundays, the area is transformed into a stamp and coin market.

La Sagrada Familia
The design of this church, the Church of the Holy Family, began in 1882 by Francisco de P. Villar. In 1883, however, the design was taken over by Gaudí. Using nature as his guiding aesthetic, Gaudí redesigned the interior columns of the nave to appear like a forest; he also greatly enlarged the size from the original plans. Except for two pauses, one in 1926—the year of Gaudí’s death—the other in 1940, work on the church has steadily continued.

The street of modernism contains some of the city’s most famous and interesting buildings from the modernist era. Impressive architecture by Gaudí includes the Casa Batlló and Pedrera, and the Casa Lleó Morera by Luis Domènich i Montaner. Many of Barcelona’s most exclusive shops are located along and around the Passeig de Gràcia as well.

From your bike, you can see the peaks of the Pyrénées looming on the horizon as volcanic flats stretch out ahead, leading to unbelievably pastoral fields. This is no dream. On our Costa Brava Biking trip, the unexpected happens every day.

Pedal with the peloton of your own choosing as you stretch your legs through the Pyrénées on our private Costa Brava Biking trip. Sweep through Roman villages and Dali’s real-life inspirations—you’ll melt like a clock for this sensuous region. 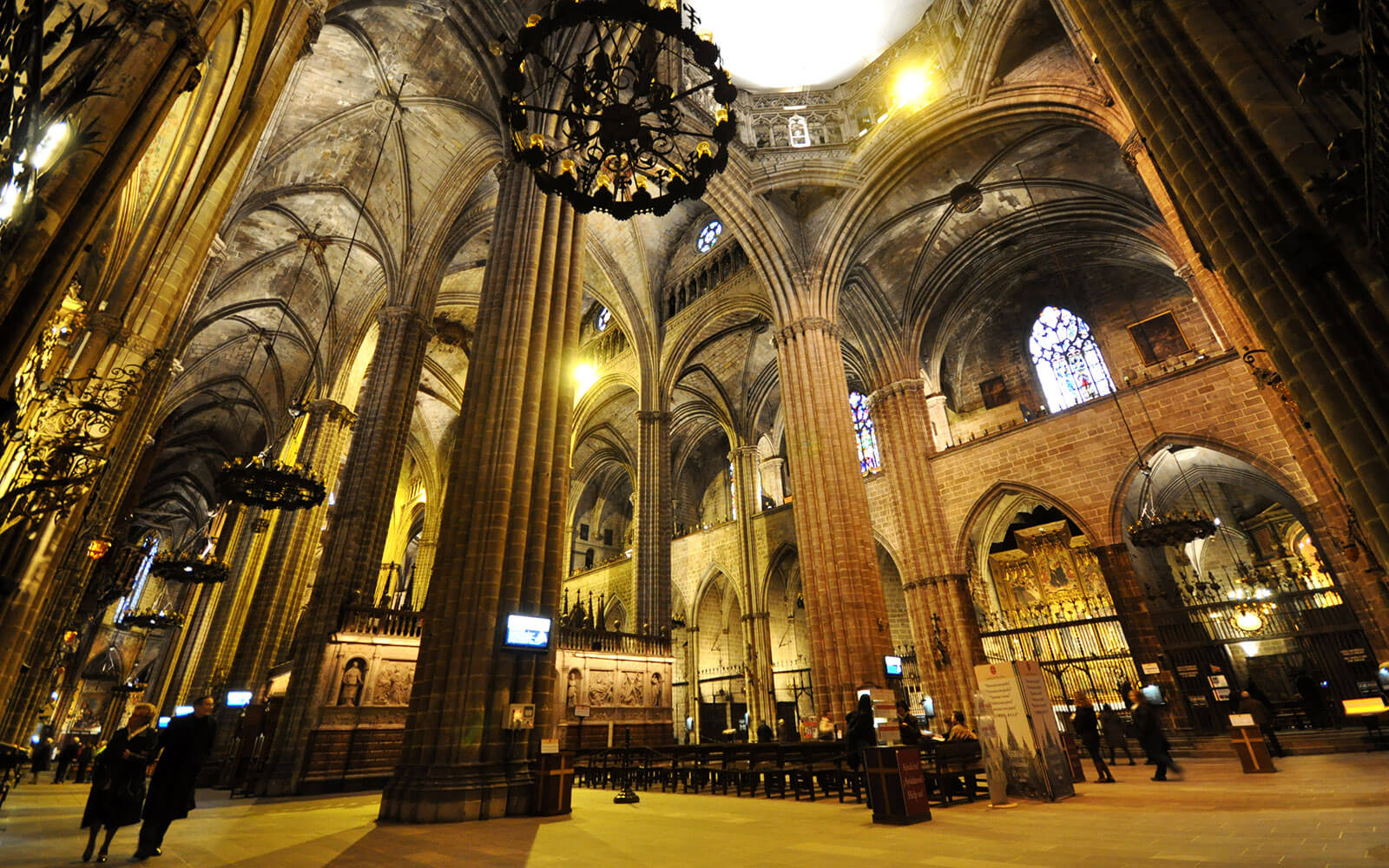 Bari Gòtic
Named for its labyrinth of medieval streets and squares, the fascinating Gothic neighbourhood is testament to the development Barcelona experienced between the 12th and 15th centuries. The district actually has roots that extend back to the first century and Roman walls can still be found scattered about the neighbourhood.

The most outstanding monument in the Bari Gòtic is the Cathedral of Santa Eulalia, pictured above. Begun in the 13th century, it is an excellent example of Catalan Gothic style. It has tall, slender pillars, and houses a marble choir screen sculpted after drawings by Bartolomé Ordóñez, one of Spain’s greatest Renaissance artists. Just around the corner is the Palau de la Generalitat, the seat of the autonomous government of Catalonia, and a vast edifice with a classical façade and 15thC foundations. Not far in the other direction are a handful of interesting monuments: the Plaça del Rei—the Royal Palace with its watch-tower, a refectory with Roman arches and the 14thC Agueda, Chapel of St. Agatha.

Barri de Gracia and La Barceloneta Bari de Gracia and Barceloneta are two traditional and authentic neighbourhoods that are away from central tourist attractions—and very interesting to take a stroll through during the day, if you’re looking to escape the crowds. Barceloneta was the old fishing port of the city and now has a lively indoor market at its centre. It has a boardwalk for a great coastal stroll, its streets are real and authentic, and it’s just a 15-minute walk from the Born neighbourhood. Gracia is at the base of the mountain, below Gaudi’s Park. The locals say the air is clearer and cooler up there. (We’ll leave it up to you to judge for yourself!) It’s just a 10-minute subway ride from Plaza Catalunya and has some great plazas for people-watching as well as lots of low-key restaurants to choose from.

La Rambla
Strolling La Rambla is one of the most quintessential things to do in Barcelona. The city’s most famous street is also its most exuberant. The boulevard runs along the edge of the old part of the city, reaching from the lively Plaça de Catalunya down to the harbour. Beneath the plane trees, tourists and locals alike gather to take in the street’s non-stop action. Be sure to stop into the famous Boqueria (traditional indoor market) for fresh juices, tapas or a caña in the afternoon!

Insider's Guide to Barcelona See + Do