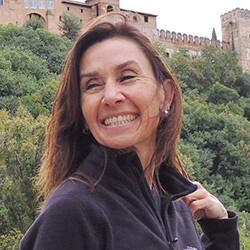 More than a drink, it’s a tradition, as important to Argentina as mint tea is to Morocco and wine is to Burgundy. Mate (pronounced mah-tay), a sort of South American tea, has been consumed since time immemorial by South America’s Guaraní natives.

In the campo (field), the gaucho (an Argentine cattleman) starts and finishes his day with yerba mate (pronounced “sherba mah-tay”). A kind of holly, the plant used in the tea (Ilex paraguariensis) belongs to the Aquifoliaceous family and contains one percent mateina, the equivalent of caffeine, and is considered to be a stimulant.

The gaucho uses a mate (a hollow, dried squash) and a bombilla (a metal straw), and will generally prepare it as follows.
1. Fill the mate about two-thirds full with the yerba mate.
2. Cover the opening with your palm, then shake the mate to catch the lightest of the yerba dust on your hand.
3. Tilt the mate so that the yerba accumulates on one side.
4. Pour in a little hot (not boiling) water on the empty side and let the yerba absorb the water. Then, add a little more.
5. Next, place the bombilla filter into the empty side and fill with hot water.

On our Argentina Biking trip, explore the unbelievable variety of the country’s northwest: from jaw-dropping mountain vistas to canyons that change colour with the sun. 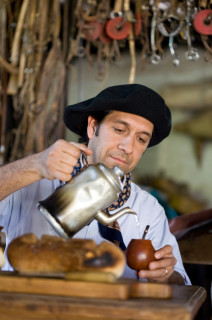 The uniqueness of the tea lies both in the method of serving and the conviviality that the whole process fosters. Once made, the cebador (which refers both to the gourd, and the keeper of the gourd) then passes the mate around the assembled group, fostering an atmosphere of friendship. One of the cebador’s most important tasks is keeping water in the mate, maintaining a suitable state for drinking. Note: Only say “gracias” to the cebador when you do not wish to be served anymore.

While most common in Argentina, mate remains popular in some parts of Chile, Peru, Uruguay, Paraguay and Brazil. There are some regional variations in how it is served—it can be taken with sugar or with lemon, for instance. In most places in the interior of Argentina, it is preferred amargo (unsweetened).

Though they later forbade its consumption, Jesuit missionaries also cultivated the tea, drank it, and tried to introduce it to Spain. Today it is worldwide (there’s even a mate toothpaste!), but South America, and Argentina in particular, remains the Mecca of mate.

Ana was born and raised in northern Argentina, and has over a dozen years of experience crafting trips that highlight the heart and soul of her home country. This certified Wilderness First Responder and fitness instructor is also an accomplished horsewoman and hiker in her off time!